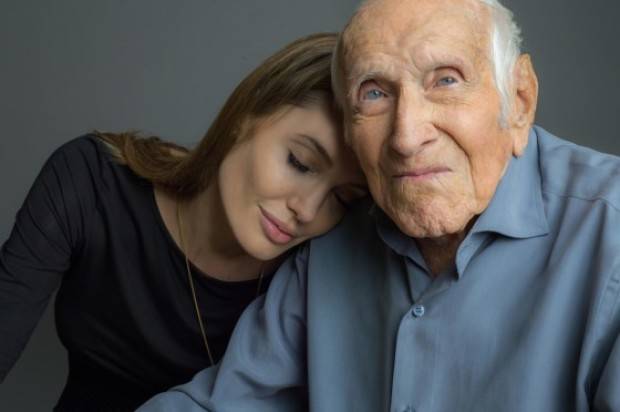 The project has a long history at Universal Pictures, which first acquired the rights to tell Zamperini’s life story in 1957, planned as a starring vehicle for Tony Curtis as his follow-up to Spartacus.

Jolie and Zamperini, neighbors in the Hollywood Hills, have become close friends over the development of the film, as the filmmaker has listened to the war hero recount the incredible incidents of his life over many months of preparation.

Zamperini gave Jolie a golden running shoe pendant, a prize from one of his earliest races, which she will wear every day as she helms the film in Australia over the coming months.

Jack O’Connell earned the starring role and will appear as Louis Zamperini.  O’Connell recently spent several afternoons meeting with Zamperini at his home to hear the man he’ll be portraying recount his incredible tale firsthand.  Zamperini retains many keepsakes from his adventures in his home.  Seeing Zamperini’s World War II bomber jacket, O’Connell asked permission to put it on, which Zamperini gladly gave.  The jacket fit O’Connell perfectly and became one of the first moments of him inhabiting the life of this legendary hero.

The film is based on “Unbroken: A World War II Story of Survival, Resilience, and Redemption” by Laura Hillenbrand, who also wrote “Seabiscuit: An American Legend.”  Universal optioned the rights to the book in December 2010.

Since being published in 2010, “Unbroken” has spent more than 145 weeks on The New York Times best-seller list, 14 of those in the top position, and has sold almost 3.5 million copies worldwide.  A young-adult version of the book will be published by Random House this coming spring.

ANGELINA JOLIE: “It will be hard to make a film worthy of this great man.  I am deeply honored to have the chance and will do all I can to bring Louie’s inspiring story to life.  Everyone involved in the film shares this deep responsibility.  Like all readers of Laura’s book and all people who love and admire Louie, I am a fan who has learned so much.  He has made me a better person.”

LOUIS ZAMPERINI: “Angelina is a human dynamo, and I know she will tell this story in the right way.  I’ve received so many letters and talked to so many people who say that Laura’s book has helped them when they were going through hard times.  I believe the movie will reach even more people with that message.”