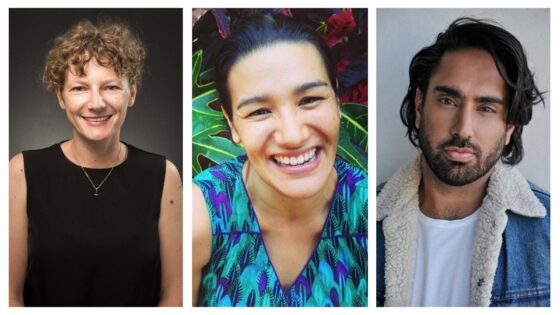 Not-for-profit film, television and theatre production company Co-Curious has today announced a string of major hires including Clare Atkins (Stateless, The Heights) as Story Producer and Kali Reid (8 Nights Out West, Clickbait) as Creative Producer, who will jointly head up the Screen Program, and Bali Padda as Head of New Work, Stage.

Atkins is a writer, script editor, script producer and development executive with 20 years’ experience in the Australian television industry. She joins Co-Curious from ABC where she served as Development Executive, supporting the story and script development on dramas and comedies including Stateless, Fires, Significant Others, Operation Buffalo, The Heights, Les Norton, Diary of an Uber Driver, Content and Here Out West. She is the author of Nona & Me, a young adult fiction novel written whilst living in Arnhem Land, which was shortlisted for the Children’s Book Council of Australia Awards 2015. Her second novel, Between Us, won the Children’s Book Council of Australia Book of the Year for Older Readers 2019 and was shortlisted for the Victorian Premier’s, NSW Premier’s and Prime Minister’s Literary Awards. Her first picture book, Egg, will be released in 2022.

Reid has just completed post-production on ABC series 8 Nights Out West and was associate producer on the hit Netflix thriller Clickbait. In 2019, Reid executive produced the Screenability Film Makers Fund for Create NSW, premiering at Sydney Film Festival. Prior to this, she was the Scripted Development Coordinator at Matchbox Pictures where she developed award winning projects including Stateless, The Heights, Glitch and Secret City. Prior to television, Kali was a curator and produced live work for Sydney Festival, Campbelltown Arts Centre, Art & About, Underbelly Arts Festival and Carriageworks among others.

Padda is a director, producer, actor development executive and dramaturg. He was recently Industry Development Executive at Screen Australia and has spent the past decade consulting for the screen and arts industries on creative projects, industry and business strategy, diversity, equity and inclusion and talent/artist development, championing the authentic voice of historically excluded communities. He made his professional directing debut with Guards at the Taj (Riverside’s National Theatre of Parramatta 2022) to critical acclaim, and has developed projects with Playwriting Australia, National Theatre of Parramatta, the ABC, Griffin Theatre Company and other independent artists.

Co-Curious’ CEO, Annabel Davis said: “Over the next 12 months, Co-Curious will look to consolidating our learning and building on our body of work in both theatre and screen in order to meet a set of ambitious new goals. Counting and Cracking in theatre and Here Out West in screen have helped us refine our unique model of development with a firm focus on learning and further refinement in years to come.

“The wealth of experience that Clare, Kali and Bali bring to the company is extraordinary. Their demonstrated commitment to supporting creatives from underrepresented backgrounds and their extensive network of stakeholders will be an asset to the company. We look forward to embarking on this new chapter of the company’s growth with this dynamic and talented team.”

Co-Curious is a sister company to CuriousWorks, one of the country’s leading community arts organisations. For more information visit www.co-curious.com.