#creation #miracle australian Music Singer SONGWRITER by Caroline Russo | on November 21, 2020 | 0 comments | in Music | Like it Emerging Australian music artist Anthony Kale has had an incredible career so far, with two number ones on The Independent Radio Charts U.K. with Be Responsible and Without a Word, his crowning achievements. With a string of successful single releases behind him, including Beautiful Stranger (2019), You’re the One (2019), and Millionaire (2018), Anthony’s new track Miracle will no doubt receive the same rapturous response.

Miracle is a dynamic contemporary dance-pop track that reveals Anthony’s adaptable and skilful voice and the obvious ability for writing memorable songs with big hooks, and powerful lyrics with universal appeal. Miracle takes a look at the themes of unfulfilled love, obsession, and the hold such love can have on an individual’s emotional state. Yet Anthony’s performance is laced with a mesmeric element, as it narrates the trials of emotional upheaval and restrained passion With a noteworthy tally of over 300,000 Spotify streams, Anthony’s Miracle promises to expand his audience reach while maintaining his fervent, global fanbase. 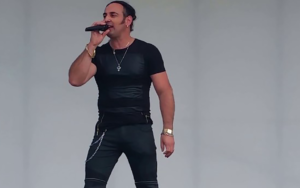 Like a hybrid Enrique Iglesias, Adam Lambert and Phil Collins, Anthony’s style seamlessly fuses some of the major aspects of dance music with the melodic weight of modern pop, absorbing a myriad of influences to arrive at an exuberant musical palette. With a swell of huge drums and a potent chorus hook Miracle takes off, infusing dance sensibilities to inspirational high-powered, irrepressible pop. The verses remain typically understated, underscoring the lyric’s direct and unmistakeably familiar observations; this is a kind of love song after all, revealed from the point of view of the desirous, the pleading admirer.

Currently working with music producer Salvatori Panetta (Kylie Minogue, Kisschasy, Gina G), Anthony has reached a creative peak with Miracle, honing both his songwriting facilities as well as restating his vocal prowess. With its lush production, dynamic performances and sustained melodic fervour, Miracle won’t perhaps need a Miracle for it to become a massive hit.