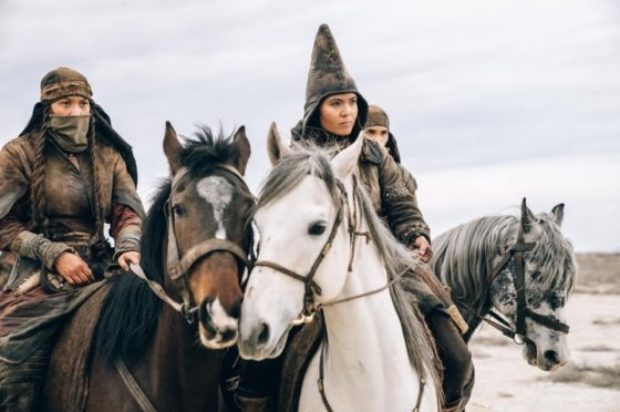 Starring Kazakhstan superstars Almira Tursyn (as Tomiris), Adil Akhmetov (as Argun), and Aizhan Lighg (as Sardana) who perform all of their own action packed stunts, Tomiris, tells the real life story of the great Queen who along with her female warriors united divided tribes of nomadic warriors and created a powerful nation.

Queen Tomiris lived 2,500 years ago but her legacy lives on and continues to thrive today. She was a mother, warrior, and incomparable strategist known and credited for the creation of female warrior divisions. Her beauty inspired many artists in Europe, her life even described in great detail in the chronicles of Greek historian Herodotus, and her legacy still inspires thousands of women throughout Central Asia.

“The story of Queen Tomiris is extraordinarily powerful, filled with heartbreak, loss, inspiration and victory,” stated Arclight Chairman Gary Hamilton. “This feature is full of action and beautifully shot in Kazakhstan where it has received a rave reception at the box-office where it is currently in theatrical release and is the highest grossing action film in the history of Kazakhstan. We are delighted to share this special and rare film with our distribution partners around the world.”

The film is a co-production between Kazakhfilm Studios and Sataifilm. The film was released in Kazakhstan on October 1, 2019 with a strong reception, making it one of the highest grossing films in the history of Kazakhstan.

The distribution deal was negotiated directly by Gary Hamilton and Ying Ye on behalf of Arclight Films and Gaukhar (Gia) Noortas, a Kazakh-American film producer, and the head of the Honorary Consulate of Kazakhstan in Los Angeles on behalf of Sataifilm and Kazakhfilm Studios.