ARNOLD SCHWARZENEGGER IS BACK IN AN ALL NEW CLIP FROM ‘TERMINATOR:GENISYS’

Arnold Schwarzenegger film He is Back Terminator Genisys by Caroline Russo | on June 24, 2015 | 0 comments | in Film | Like it 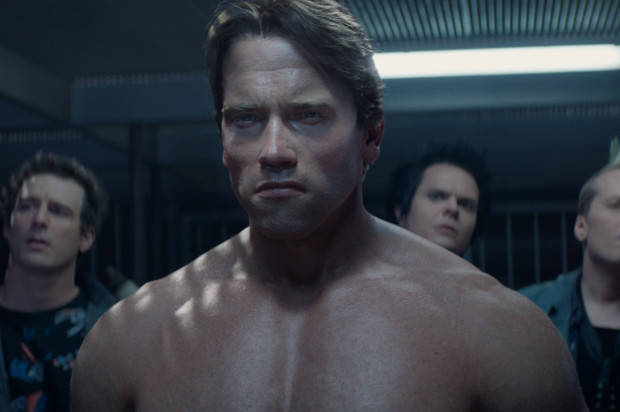 Arnie vs Arnie – This is going to be epic! Check out this clip of original Arnie vs new Arnie!

The European Premiere of Terminator Genisys took place in Berlin with Arnie, Emilia Clarke, Jason Clarke, Jai Courtney and J.K Simmons. Check out the premiere round up here.

Synopsis: When John Connor (Jason Clarke), leader of the human resistance, sends Sgt. Kyle Reese (Jai Courtney) back to 1984 to protect Sarah Connor (Emilia Clarke) and safeguard the future, an unexpected turn of events creates a fractured timeline. Now, Sgt. Reese finds himself in a new and unfamiliar version of the past, where he is faced with unlikely allies, including the Guardian (Arnold Schwarzenegger), dangerous new enemies, and an unexpected new mission: To reset the future…

The “TERMINATOR” franchise launched in 1984 with Schwarzenegger as the title character and spanned three subsequent films, which have earned over $1 billion at the worldwide box office. Schwarzenegger reprises his role as the iconic character and Jai Courtney joins the film as hero Sgt. Kyle Reese, who travels back in time to save the ‘Mother of the Resistance’ Sarah Connor.