APSA Music Awards New Zealand Film Commission screen australia by Caroline Russo | on May 14, 2018 | 0 comments | in Film Festival | Like it 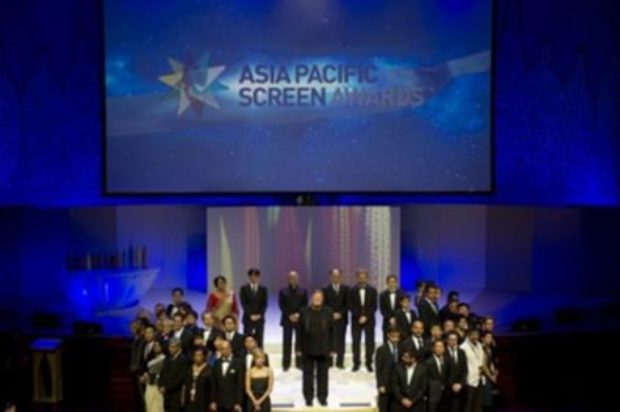 The Australia-based Asia Pacific Screen Awards (APSA) today announced that a new award category honouring the role of music in film will debut at the 2018 edition of its prestigious annual awards.
The international award will be a first for the world’s fastest growing film region of 70 countries and areas, which celebrates the region’s cinematic excellence and cultural diversity on screen.

The announcement was made at an APSA Academy event at Cannes, attended by industry guests from across the region, APSA Academy members with titles in Cannes Competition and Un Certain Regard and representatives from APSA partner organisations including the European Film Awards and FIAPF. It coincides with the entry of three films in competition at Cannes that were supported in development by the MPA APSA Academy Film Fund.

A dedicated International Jury of specialist music practitioners will determine the winner of the new award. The inaugural winner will be presented with the award, a signature glass vessel designed by Brisbane artist Joanna Bone, at the 12th APSA Ceremony in Brisbane, Australia on November 29.

Chair of the Asia Pacific Screen Awards, and its Academy, Michael Hawkins said ‘Music is an incredibly powerful medium and one that lies at the heart of cultural expression. This new Asia Pacific Screen Award recognises the phenomenally talented artists who craft the music of film across our vast region, and who deserve to be recognised from within it. Honouring cultural diversity on screen through cinematic excellence is what APSA is all about and this award is the natural next step in furthering this objective.’
Brisbane Lord Mayor Graham Quirk said ‘This new APSA category celebrates the artistry of music and further enriches the event’s potential for cultural-dialogue, learning and collaboration. Brisbane is a place of boundless opportunity and the Asia Pacific Screen Awards provides a fantastic platform for Australian and international creatives to connect across the region. On behalf of the city, I look forward to welcoming these talented musicians and filmmakers to Brisbane.’

Supported by Screen Australia and the New Zealand Film Commission, the Cannes event was an opportunity to focus on the collaborative relationships across Asia Pacific and the chance for filmmakers, particularly APSA Academy members, and the region’s industry representatives to network while at the world’s leading film festival.

APSA Academy Members have a strong representation at Cannes this year, with a presence across more than half of the Official Competition titles, including Asghar Farhadi’s Opening Night film Everybody Knows, as well as titles in Un Certain Regard.
The nominees will be inducted into the prestigious APSA Academy presided over by President, Australian screen legend Jack Thompson AM PhD. The Academy boasts over 1000 of the region’s leading filmmakers and provides exclusive networking, development and funding opportunities available to Academy members through the MPA APSA Academy Film Fund, and Academy mentoring opportunities for the next generation of Asia Pacific filmmakers through the Asia Pacific Screen Lab.