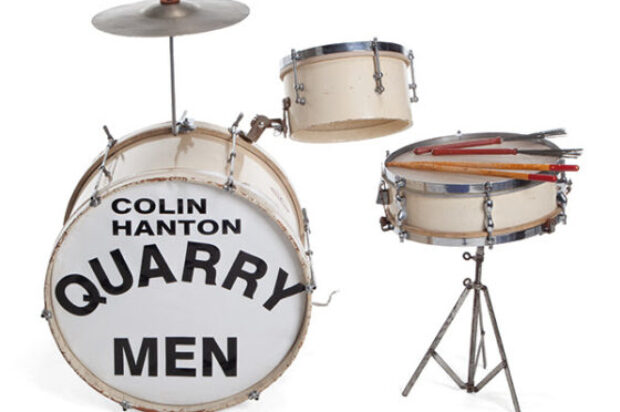 Julien’s Auctions has announced two important and historic pieces from the early career defining eras of the Beatles and Madonna will be the world-record breaking auction house to the stars’ marquee headliners of their premiere music auction event MUSIC ICONS, taking place Friday, May 20th, Saturday, May 21st, and Sunday, May 22nd 2022 live at Hard Rock Cafe® New York and online at juliensauctions.com.

The original drum kit used in the Quarry Men, the pre-Beatles group formed by John Lennon and Madonna’s iconic “Material Girl” pink gown ensemble, will headline a lineup featuring over 1,000 spectacular collectibles and memorabilia owned and used by some of the world’s most influential and music artists of our time will be offered.

Formed by John Lennon in Liverpool, England in 1956, the Quarry Men (also known as The Quarrymen) was the legendary British skiffle rock and roll group, whom with later joining members Paul McCartney and George Harrison, would famously evolve into the greatest rock and roll band of all time, the Beatles. Heading to the auction for the first time is a John Grey and Sons Ltd. white finish “Broadway” drum kit purchased from Frank Hessy’s famed music store in Liverpool in the autumn of 1956 by Colin Hanton, the drummer of The Quarry Men from 1956 until 1959 who was part of the group throughout its most important line-up changes – including the joining of Paul McCartney in July of 1957 and the joining of George Harrison in March of 1958.

Original Drum Kit used in the Quarry Men
Hanton played this same drum kit on the very first professional recording of the pre-Beatles group, which took place on July 12th, 1958 at the Liverpool studio of Percy Phillips, where John, Paul, George, and Colin (along with John Lowe on piano) recorded an original track written by McCartney and Harrison called “In Spite of All the Danger,” as well as a cover of the hit Buddy Holly song, “That’ll Be the Day” – both of these seminal recordings were featured on The Beatles compilation release, Anthology 1.
Other prominent stage performances where the drum kit was played include: The Quarry Men’s first live performance, the Rosebery Street Party on June 22nd, 1957 at the request of Hanton’s friend Charles Roberts, who was responsible for stenciling the band name onto Hanton’s bass drum and for taking the three photographs of the band during the concert, the earliest known images of John Lennon performing; the July 6th, 1957 performance at the Garden Fete at St. Peter’s Church in Woolton, Liverpool, where Paul McCartney saw the band for the first time and soon became a member (amateur recording of the concert available online); and on several occasions at The Cavern Club where the incarnation of the band – known as The Beatles – would eventually be discovered and rise to international fame. Hanton departed the group in 1959 and stopped playing the drums all together, storing the drum kit away on top of an old wardrobe closet until 1997 when he brought it out again to play at the 40th anniversary of the Garden Fete performance, commemorating the first meeting of McCartney and Lennon.
The drum kit has been subsequently featured on display at several historical institutions and exhibitions, including The Beatles Story Museum in Liverpool and The Magical History Tour in the United States. The drum kit, hand-signed by Colin Hanton in the inside of the tom-tom drum and inside of the bass drum, is estimated at $400,000 – $600,000. The lot also includes a 1-of-1 Quarry Men Drum Kit Animated NFT serving as the digital representation of the physical drum kit used by Colin Hanton in The Quarry Men. The Queen of Pop and the indisputable American style provocateur, Madonna, has trail blazed music, celebrity and fashion in a way all her own and like no other artist in the 20th and 21st century. This year marks the 38th anniversary of the release of one of Madonna’s mythic hits and one of pop music’s biggest female empowerment anthems and fashion statement making music videos that coined the empress one of her signature nicknames, “Material Girl.” One of the artist’s most iconic looks of all time will dazzle the auction stage in Julien’s exclusive offering of her pink Marilyn Monroe inspired gown and accessories worn in the Gentlemen Prefer Blondes’ “Diamonds Are a Girl’s Best Friend” mimicked film sequence of her classic 1984 “Material Girl” music video. The lot consisting of the pink satin dress with bustier top and oversized pink satin bow designed by white faux fur stole from Edwards-Lowell of Beverly Hills pink satin opera gloves and rhinestone bracelets is estimated at $100,000 – $200,000. Originally made for the 1980 television movie Norma Jean, the dress was rented from the Palace Costume and Prop Company for Madonna’s use in the “Material Girl” music video and was used in Blond, the 2001 television movie exploring the life of Marilyn Monroe. The lot also includes a 1-of-1 “Material Girl” Dress Animated NFT serving as the digital representation of the physical dress worn by Madonna in “Material Girl”.

“Material Girl” reached the top-five in Australia, Belgium, Canada, Ireland, Japan and United Kingdom and reached the number two position on the Billboard Hot 100 in the United States. Julien’s Auctions has sold other prominent pieces from Madonna’s life and career including her ivory satin halter gown worn in her 1990 “Vogue” music video which sold for $179,200, her “Material Girl” music video worn hot pink charmeuse silk headband with bow embellishment sold for $28,125, fourteen times its original estimate and her MTV Video Music Award Moonman Award for Best Female Video of 1986-1987 for “Papa Don’t Preach” which sold for $22,400. 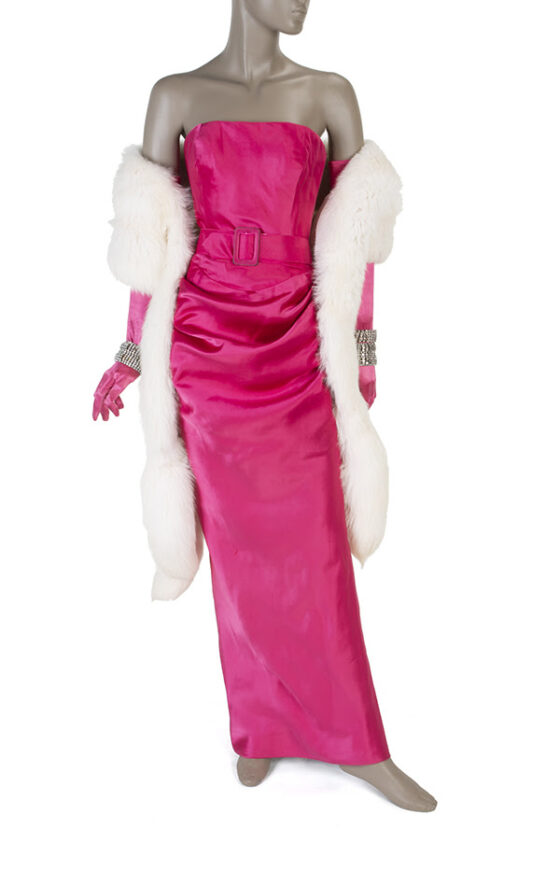