Multi-Platinum Aussie vocalist VASSY wowed the half-time crowd at the Denver Nuggets NBA Basketball game over the weekend. Adding this performance to her highlight reel of shows, VASSY is the second Aussie Artist to ever perform at an NBA game (following Cody Simpson’s performance of the national anthem at a Cavs game in 2016).

VASSY was invited on behalf of the Denver Nuggets to perform and be the main act at their halftime show in Denver at the ‘Ball Arena’ (a stadium that Sir Elton John performed at the night prior). It was a special night also being ‘Pride Night’ and was a capacity crowd of 20,000+ people. 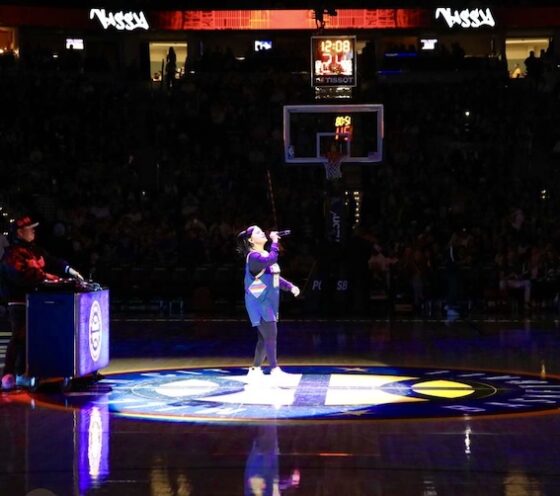 “It was such an honour to be invited by the NBA to perform for the Denver Nuggets, at their halftime show for ‘Pride Night.’ It was such an awesome night. I was also invited to throw the first shot (which is a ritual that they do at basketball games). My husband threw the shot (on my behalf) and got it in, in one and the crowd went crazy. I signed the ball and threw it into the crowd for the fans. We sat courtside in the front row and had our very own suite, what an incredible night we’ll never forget” shares VASSY.

The Nuggets ended up winning by 20 points and VASSY wore the No. 50 jersey given to her by two-time NBA dunk contest runner-up Aaron Gordon, one of the top players in the team.