Hollywood Walk of Fame Simon Baker The mentlist by Caroline Russo | on February 15, 2013 | 0 comments | in Hush Hush Gossip | Like it 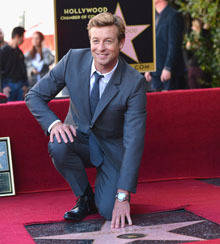 Simon Baker  the hit TV series “The Mentalist” star was given his very own star on the Hollywood Walk of Fame Thursday for his TV work.”The Mentalist” executive producer Bruno Heller and Australian actress Naomi Watts were present with Baker  when he received  the honour.  Naomi Watts are close friends from way back when they lived in Australia  before they become famous and both  co-starred in “The Ring 2. “

He gave a emotional thank you to his family and had mentioned that the only other place his name is engraved is Bondi Beach many years ago and his daughter was only One year.

Baker has received both Golden Globe and Emmy nominations for his role as quick-witted consultant Thomas Jane on the crime drama series, currently in its fifth season.