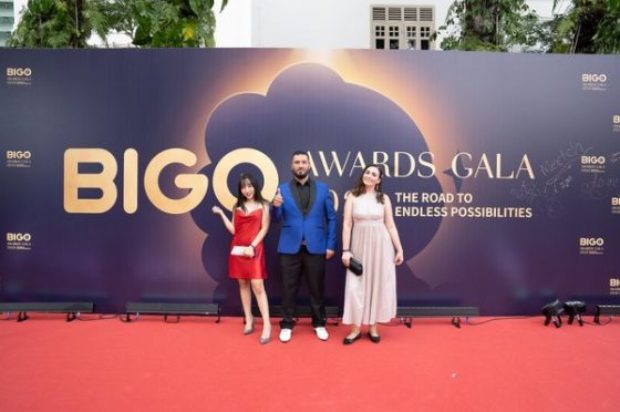 Australian winners of Top Regional Family (middle) and Top Regional Broadcasters (left and right) are seen here on the red carpet leading to the Awards Ceremony.

Leading technology company from Singapore, BIGO Technology (BIGO), the company responsible for popular new age communication platforms like Bigo Live (Live Streaming), Likee (Short-form Videos), and imo (Video Communication) hosted the first ever BIGO Gala Awards 2020 for talented broadcasters, on January 15, 2020, at the Capitol Theatre in Singapore. The event recognized and felicitated live-streaming hosts who have performed exceptionally well on Bigo Live over the past year.

The ceremony was held in a grand fashion with a red-carpet affair attended by some of the biggest names on Bigo Live, who flew in from all over the world, joined by hundreds of their top fans who showed up in support. More than 75 broadcasters were awarded at this ceremony bringing the total number of attendees to close to 1,000. The 4 categories of award winners were “Top Regional Broadcaster”, “Top Regional Family”, “Top Global Broadcaster” and “Top Global Family”; indicating the best of the best in both the regions and across the globe.

Bigo Live is rising fast in popularity around the world, where it has reached a total of around 22 million Monthly Active Users (MAUs). Live-streaming has become a worldwide phenomenon, as millennials feel the need to be constantly connected, and such platforms such as Bigo Live, allow them to stay connected, meet different people and share new experiences. Many of the award winners also took this opportunity to connect with their fans, even broadcasting live while receiving their award.

Winner of the “Top Regional Family” representative Samir, who comes from one of the strongest families in Australia claims that being here in Singapore gives him validation that teamwork pays off. He intends to grow his family and to eventually be one of the top families in the world.
Winner of the “Top Regional Broadcaster” Annie, or better known from her nickname “little fish” is a K-pop champion dancer. She shares that she is happy to share her love for K-pop while encouraging her viewers to try out some of her dance moves. “K-pop is not only a dance form; it is also a way to exercise. I’m glad that I’ve the opportunity to influence my followers to stay healthy, have fun and dance!” Marzicon on the other hand attributes her wider social circle to Bigo Live.

Speaking about awards and live streaming space, Mike Ong, Vice President of BIGO Technology said, “With the proliferation of live streaming around Asia Pacific, we want to hone this space in Singapore by inaugurating the BIGO Gala Awards here, as we believe, no matter where our expansion plans lead us to, Singapore will always be BIGO’s home. Despite Singapore being small, it is a highly connected location making it a perfect market to launch this event. As the demand for content increases and mobile penetration rises, the live streaming phenomenon will continue to play a pivotal role in driving the industry. With the company now having over 330 million MAUs in over 150 countries worldwide, it is highly paramount to honour and celebrate the live streaming hosts who have performed exceptionally well on our platform over the past year. Our community is the very heart and soul of BIGO, and we want to recognize and appreciate their dedication and commitment to their art.”

The BIGO Gala Awards 2020 Guest-of-Honour, Mr. Howie Lau, Chief Industry Development Officer at the Infocomm Media Development Authority (IMDA) agreed that the BIGO Awards Gala 2020 marked the growing significance of live streaming, giving credit to the winners who have made a difference in the platform. Snippets of the ceremony will be aired in Southeast Asia, Middle East, U.S.A. Japan and Taiwan.