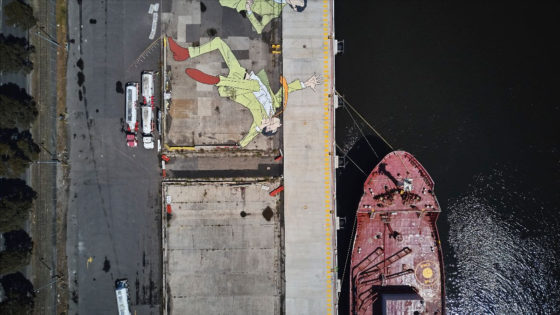 Inhabiting a colossal 9000 sqm of disused waterfront ground space at Port Melbourne’s Fisherman’s Wharf precinct (co-owned with Independent Cement and Lime), the project took Bennett 30 days to complete; using 700 litres of Taubmans All Weather paint to compose the work which comprises a series of 10 individual 30-metre-long figures which come together to form separate frames of a “moving” animation.

Says Juddy Roller founder Shaun Hossack: “The sheer size of this project is truly unprecedented. It is now the Southern Hemisphere’s largest public artwork – four times the size of the previous holder of that title, The Adnate hotel in Perth, which clocks in at 27 storeys high. In comparison, Kitt’s work has taken over the equivalent of 90 floors-worth of ground space. ‘Revolution’ is an apt title; the proportions are truly epic.”

Showcasing the artist’s distinctive figurative style, the work is impossible to take in up-close but has been made fully visible from above thanks to satellite technology and a dedicated team of designers and animators whose work transforms Bennett’s static mural into a fluid gif-style moving animation which audiences will experience online.

“Kitt has always focused on creating artwork that is intended to be viewed from an aerial perspective,” Hossack explains. “By approaching his work in this way, he is pioneering a new context in which to view art, and creating a futuristic gallery of sorts that can only be seen from above.”

This experimentation with a new digital art form unites Bennett’s otherwise unconnected passions of animation and large-scale mural work while drawing on his talent for creating art on unorthodox surfaces.

“I did quite a lot of animation as a kid but haven’t had a chance to revisit it until now,” says Bennett. “This has been a true passion project because it’s allowed me to combine these two interests: my childhood love of animation and my more recent fascination with painting large-scale ground murals.”

And the trickiest aspect of his super-sized challenge? Finding a way to paint over (or around) the many puddles and holes and patches of gravel and dirt he found on his concrete ‘canvas.’

“It was almost impossible,” says Bennett. “When I first looked at the site through satellite photo it looked like nice flat concrete but dealing with the surface up close was a very different matter,” he says. “You can’t really slap a design over the top of gravel.”

With his playful figurative work dotted across various sites in Melbourne and regional Victoria, Bennett’s astonishingly proportioned designs have garnered worldwide attention (an SBS produced video of his work amassed over 3 million views) and revolutionised the way that art can be accessed.

“Kitt is one of the most exciting artists to come out of Australia in years,” says Hossack. “By harnessing technology his work is revolutionising the genre in a uniquely future-facing way. This is the new generation of Australian street art.”

The story behind this truly groundbreaking project will be shared via an animated video and short film documenting Bennett’s creative process from ideation to completion. The film will chart each step of this colossal undertaking and will coincide with an exhibition in at Juddy Roller in Melbourne on 13 December.