After the Australian federal government announced the reopening of international borders in late 2021, overseas travel has once again become a reality. Savvy’s survey of 1000 Australians aims to learn their attitudes and intentions towards international travel in the midst of a global pandemic. 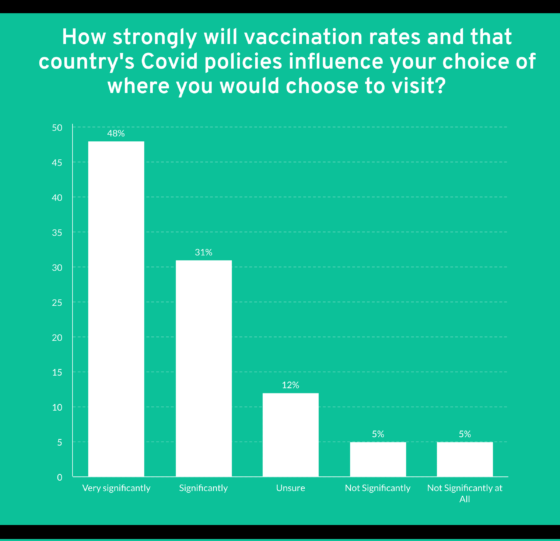 Almost two thirds of Australians (57%) feel positive about the upcoming opening of international borders, according to a new survey of 1,000 Australian adults commissioned by Savvy.

As for where people would go would be influenced by their destination country’s COVID mitigation policies. 48% said it would “very significantly” influence choice, with 31% saying it would significantly influence their choice – almost four in five respondents.

The reasons for going overseas are overwhelmingly recreational – 87% saying they are primarily leaving for a holiday or to meet family and friends. 3% said they would be returning home. As for when that would happen, 23% said within six to twelve months; 24% within one to two years. Only 2% of respondents said they’d jet off immediately.

As for where they’d like to travel the most, New Zealand and the Pacific Islands topped the survey (26%) followed by Asia (21%) and Europe (20%). Surprisingly, only 7% chose the United Kingdom, and 6% North America.

In light of Australians being stranded overseas due to tightened quarantine quotas or outbreaks in certain countries, 47% are worried about being stuck in their destination – which outweighs the worry of catching COVID-19 (31%). 43% said that the unvaccinated should get the jab before being allowed to travel. 48% of Sydneysiders agreed; as did 46% of Brisbanites. Perth and greater WA residents agreed strongly (49% and 52% respectively.)

Only a quarter said unvaccinated passengers should be allowed to travel, as long as they adhered to quarantine and travel rules. 20% said they should be allowed, provided they can produce a negative COVID test prior to boarding. 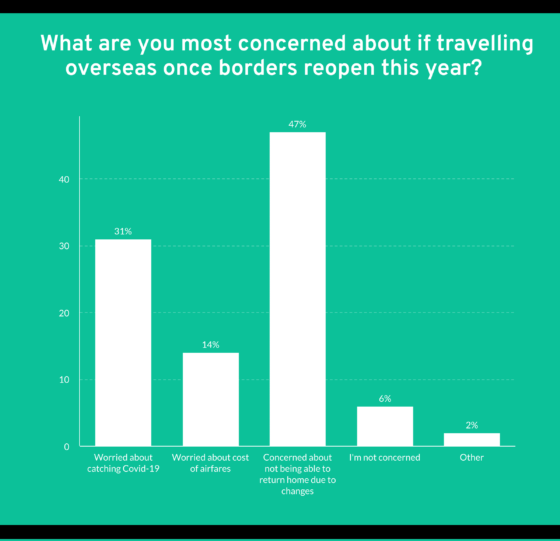 “There is an appetite to travel and a lot of people have had two years to save up for a trip,” says Savvy Managing Director Bill Tsouvalas. “Seeing as the upper end of spending is still quite small, with only two percent saying they’d spend over $20,000, this may indicate nervousness in going on holiday for extended periods. But overwhelmingly, Australians are eager to travel once again. They’ve been waiting a long time.”
https://www.savvy.com.au/australian-international-travel-sentiments-survey/