Aboriginal Australian Cinema Another Country Cannes DVD paris Ronin Films by Caroline Russo | on May 24, 2016 | 0 comments | in DVD Release & Reviews | Like it

‘Gulpilil’s commentary is dramatic, enlightening, earnest, at times playful and mischievous… It is the heart and soul of this rich, deeply thoughtful and humane documentary’ Luke Buckmaster

‘David Gulpilil introduces us to his world in this significant and insightful film. Another Country is truly a revelation.”’ Margaret Pomeranz

Australian documentary ANOTHER COUNTRY, as told by legendary Australian actor David Gulpilil, is now available on DVD through Ronin Films. Following successful and ongoing screenings around Australia, the DVD release will allow people right across the country to have access to viewing the film, described in the Senses of Cinema World Poll 2015 as ‘Best documentary of the year by miles’.

The film will screen Friday at the Cannes Film Festival as part of Cannes Cinéphiles, one of four sidebar sections of the festival along with Critic’s Week and Director’s Fortnight, in the Cinéma des Antipodes strand programmed by Bernard Bories. The film will then screen in Paris where it has been selected for the 1st Festival on Aboriginal Australian Cinema 1 – 4 June.

This past weekend ANOTHER COUNTRY continued its global success, screening at North America’s largest doco festival Hot Docs, Le Festival du Bout du Monde in the south of France (organized by Australia actress Helen Buday) and was the most in-demand film at the inaugural Something Somewhere festival in Alice Springs.

In ANOTHER COUNTRY, David Gulpilil (Walkabout, Storm Boy, Crocodile Dundee, Australia, Rabbit Proof Fence, The Tracker) tells the tale of when his people’s thousands-of-years-old way of life was interrupted by a new culture. This documentary film speaks to the havoc caused by superimposing a new culture over an old culture and the consequent clashes with all manner of things, such as time, money, garbage and errant kangaroos.

Director Molly Reynolds said “As David Gulpilil said to me last time I saw him, ‘Everybody’s got to see this film, everybody! It’s the best thing anyone can learn about us!’ So I’m very pleased about this DVD release, which is a big step in that direction.”

Following the 2015 Melbourne International Film Festival world premiere, ANOTHER COUNTRY has screened at festivals around the country and all over the world and, distributed by ABCG Film, has so far grossed more than $70k at the Australian Box Office.

Among its accolades to date, ANOTHER COUNTRY was the only Australian documentary to be nominated for a prestigious Asia Pacific Screen Award in 2015, was nominated for a UN Media Peace Award, won the Grand Prix at the 2016 FIFO Pacific International Film Festival where Abderrahmane Sissako (Timbuktu) was head of the jury, and was ranked 4th in The Guardian’s 10 Best Australian Films of 2015 (further awards list below).
Rated G and accompanied by an excellent Study Guide, ANOTHER COUNTRY has also been engaging students across Australia.
ANOTHER COUNTRY is directed by Molly Reynolds, produced by Rolf de Heer, Peter Djigirr & Molly Reynolds, written by David Gulpilil, Rolf de Heer & Molly Reynolds and made in collaboration with the Yolngu of Ramingining.

AUSTRALIAN SCREENINGS IN MAY 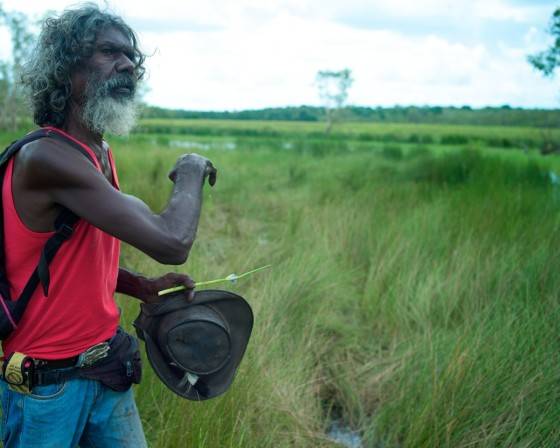