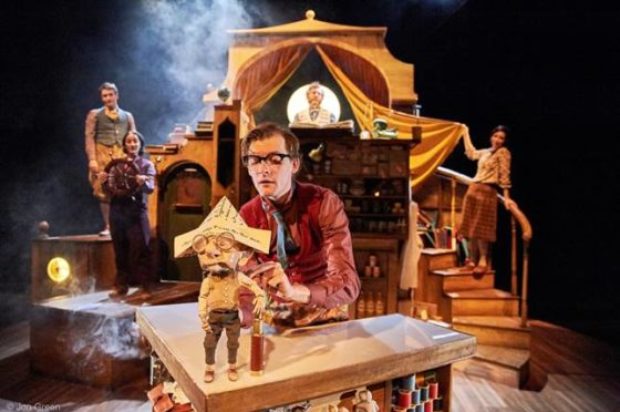 Winner of the 2016 Helpmann Award® for Best Children’s Presentation and nominated for Best New Australian Work, Bambert’s Book of Lost Stories is about Bambert, an impossibly small man with an enormous love for writing.

Bambert is a puppet brought to life by an ensemble of players, led by the multi-award winning Tim Watts.

Tucked away in his quiet attic – part of an intricate wonderland created by acclaimed Designer Jonathan Oxlade – Bambert’s only companions are the characters he has created in his stories; until one day, he decides to set his stories free.

Director Luke Kerridge said Bambert’s Book of Lost Stories created a kaleidoscopic little world on stage that would draw in children and adults.

“The stories that come back to Bambert are from all corners of the earth; from foggy London and sunny Córdoba to war-torn Syria and totalitarian Moscow,” Mr Kerridge said.

“The show does take the audience through the gamut of emotions, but there are universal ideas at its core that captivate and uplift audience members no matter how old they are.”

A tale of friendship, empathy and overcoming isolation, Bambert’s Book of Lost Stories is a heartwarming reminder of how stories connect the world and most importantly, of the power of kindness.

The acclaimed production comes to QPAC following a season at Edinburgh International Children’s Festival, one of the biggest festivals of its kind in the world.

Barking Gecko Theatre Company is one of Western Australia’s longest running theatre companies and has an award-winning history of innovation and excellence, reaching thousands of people every year and encouraging them to embrace a life of curiosity, empathy and play.
QPAC Presents Barking Gecko Theatre Company’s
Bambert’s Book of Lost Stories
Adapted by Dan Giovannoni and Luke Kerridge
from the story of Reinhardt Jung