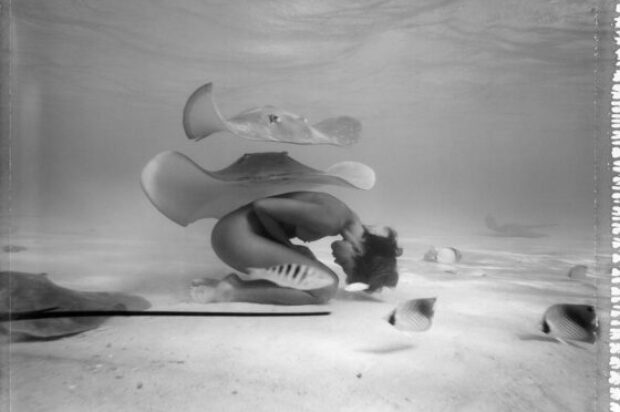 The twin brothers achieved the almost-impossible in 2007 by taking photos underwater on Polaroid 4×5 large format film for the first time ever in the world to create Floating Bits and the resulting incredible photos won the Regnard’s International Photographers of the Year in New York in 2010 at the International Photography Awards in the special category, and numerous awards around the world since.

Featuring a nude woman, Floating Bits is inspired by the need to be alone, but knowing that there is a presence somehow lurking closer. The collection was shot on Niue, a Pacific Island east of Tonga. This island is made up entirely out of limestone and when it rains, the impurities are filtered from the water, resulting in crystal clear water and visibility for 60 to 100 metres.
The images were taken underwater with a mix of a large format 4×5 Polaroid film and medium format 6×6 film on a camera that the brothers adapted especially for the shoot. The large format Polaroid required 15kg around the housing to make it sink, and only one shot could be taken at a time. 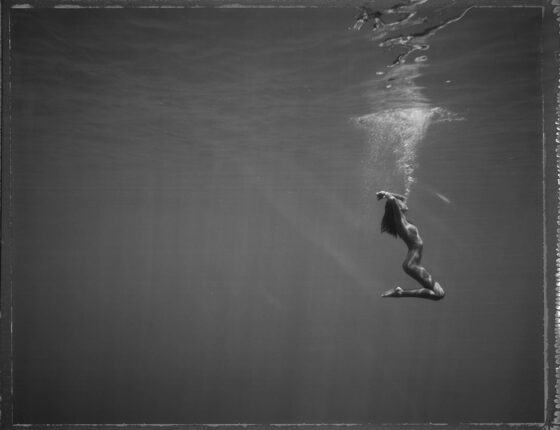 In addition to the full Floating Bits collection, some images from the A Thousand Kisses Deep collection featuring a different model photographed with sensuous sting-rays off Tahiti are also showcased.
The Floating Bits project had the brothers and the model shooting eight hours a day, taking one photo per hour, for two weeks. “Due to the long amount of time each image took, we chose models who were at ease in water, and had a strong lung capacity. Plus, due to the complexity of shooting with this type of camera (not being able to see through the lens to frame the photo) and the format of the film, the images obtained are highly regarded as unique,” said Erick Regnard.

Floating Bits has only been exhibited previously in Perth to great acclaim, and the unique, underwater format pioneered by Ian and Erick has featured in National Geographic. The Brisbane exhibition has been a great way to introduce Erick to his new hometown, after he moved here pre-pandemic from Perth.
“All the images are limited edition prints and thanks to the success of this exhibition, some will never be reproduced again. It has been humbling and exciting to share the composition and journey of the work with everyone here in Brisbane.”

The exhibition is supported by Calexico and Calexico Men, Howard Park Wines and Corona, with a portion of proceeds donated to water.org.
Exhibition details: