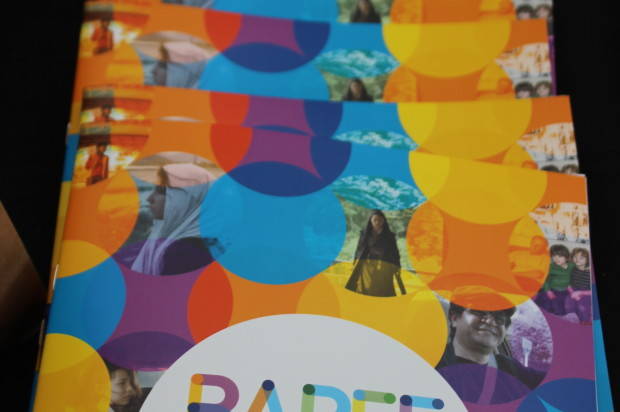 An international cultural program has been unveiled for the second Brisbane Asia Pacific Film Festival (BAPFF), proudly presented by Treasury Casino and Hotel, with 102 films from 42 countries and areas to be screened during the 11 day event from 19-29 November. 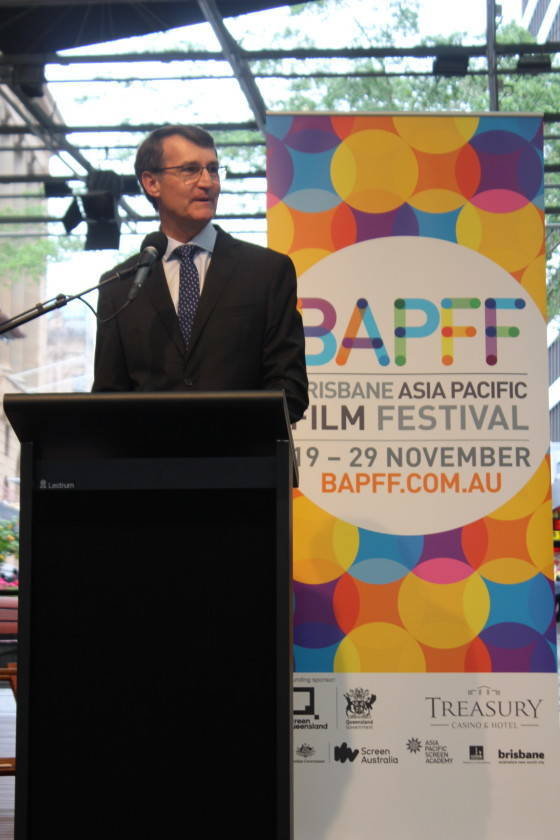 ‘Our city is the ideal location for the nation’s only Asia Pacific-dedicated film festival. We are proud to showcase the quality of film from our region to our residents and visitors this November.’ APSA/BAPFF Chairman, Michael Hawkins said ‘this is a world-class program. We’re screening films straight from their premieres at Locarno, Venice and Toronto Film Festivals to Brisbane audiences next month. 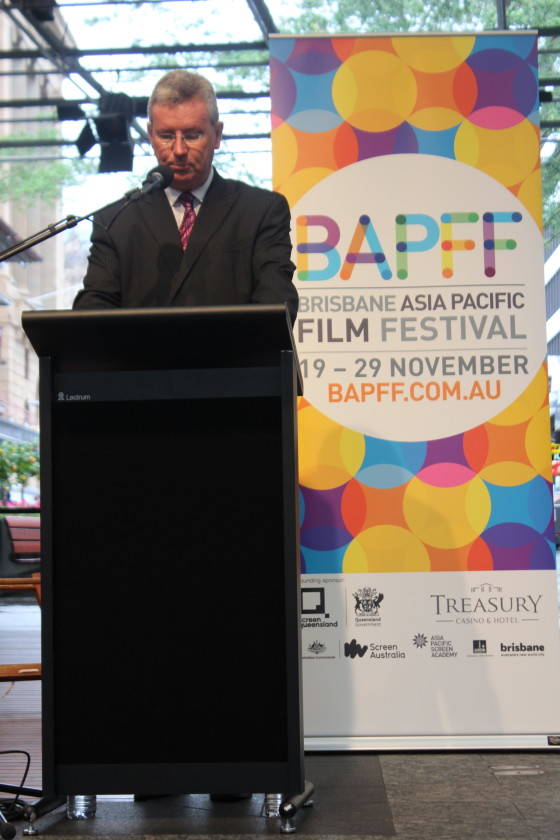 ‘We have 33 Australian premieres and 23 Queensland premieres in just 11 days. This year has been an incredible year for Asia Pacific film, particularly Australian cinema, and this is an opportunity for Brisbane to see the diversity of film on offer from our region,’ he said.

‘We have over 50 international guests attending the film festival to support the screenings. The Asia Pacific is the fastest growing region and this festival pays homage to the exceptional talent and artistry from a region that encompasses 70 countries and areas. Our program has representation from Egypt to Russia to the Pacific and includes award-winning cinema, festival gems, cult classics, restorations and masterpieces,’ said Ms Williamson.

‘Following the success of the inaugural BAPFF in 2014, this year will see the return of sections A Matter of Form and The Colours of Asia Pacific, along with a sophisticated international cultural program offering sections dedicated to Turkish, Malaysian, Hong Kong and Oceanic cinema,’ she said.

Already announced is the BAPFF Country of Focus: Turkish Waves, a special collaboration between the Asia Pacific Screen Academy, Turkish Government’s Ministry of Culture and Tourism and the Australian Government Department of Foreign Affairs and Trade. Curated by Head of Zeyno Film and Chairwoman of the Turkish Guild of Film Producers Zeynep Özbatur Atakan, this section will screen nine Turkish films including this year’s Venice Film Festival Special Jury Grand prize winner and 9th APSA-nominee for Best Screenplay Frenzy (Turkey, Qatar, France), along with the first feature from acclaimed Turkish auteur Nuri Bilge Ceylan, The Small Town, from 1971.

APSA International Jury member and leading figure of Malaysian New Wave cinema, U-Wei Bin HajiSaari, has selected two Malaysian films as part of Voices from Malaysia – the Australian premiere of the compelling family drama Nova and youth crime drama, Songlap. The short film One Note One Fragment (a segment of the omnibus Fragment), made for the tenth anniversary celebration of the Asian Film Archive (AFA), written and directed by HajiSaari, will be screened prior to both films.

Curated by Herman Van Eyken, Head of Griffith Film School and Khadidja Benouataf from The Oceanian International Documentary Film Festival (Festival International du Film Documentaire Océanien , known as FIFO), Carte Blanche for Films from the Pacific will showcase 11 remarkable films from the vast islands of Oceania including French Polynesian films My Adopted Family and Tatau, and New Zealand films There Once Was An Island, This Way of Life and Made in Taiwan.

‘Cinema is a unique art form and our program reflects this. We are particularly drawn to filmmakers who seek to refine, experiment and expand. The subtlety and poetry of these films demonstrate different countries’ aesthetics and artistic expressions. In this year, there are recurring themes of connection and self-discovery that are profoundly resonating. We are blessed to see these filmmaker’s visions brought to screen and are thrilled to share them with our audience,’ Ms Fung said.

Masterpieces Revisited will showcase works of art from the 21st Century that demand to be seen on the big screen. Joining Hou Hsiao-hsien’s A City of Sadness (Taiwan) in this section are Mikio Naruse’a Floating Clouds (1955, Japan) and the new 4K restoration of King Hu’s A Touch of Zen (1971, Taiwan).

The Ties that Bind section explores films that pay tribute to family as a source of comedy and drama. This section offers the Queensland premiere of The Daughter (Australia) alongside APSA-nominated films Mina Walking (Afghanistan, Canada), Motherland (Turkey, Greece), Lorna (Philippines), Our Little Sister (Japan), and Set Me Free (Republic of Korea) and 9th APSA Best Feature Film nominee End of Winter. Also featuring is Chinese-Australian filmmaker Liu Shumin’s The Family, an ambitious and accomplished portrait of contemporary China which opened the Critics’ Week section at this year’s Venice Film Festival.

The Journey is the Thing offers a chance to discover beautiful and soulful journeys through cinema. This section includes the Australian premieres of three-time APSA nominee A Corner of Heaven (People’s Republic of China, France) from Miaoyan Zhang, Stranger (Kazakhstan), Heavenly Nomadic (Kyrgyzstan), The Find (Russian Federation, Finland) and from the People’s Republic of China, River and Tharlo.

Co-presented by BAPFF and Queensland University of Technology (QUT) is Hybrid Story Worlds: Imagining our Future – a full day of free immersive visual experiences which focus on Virtual Reality at The Cube, QUT on Sunday 22 November. Curated by Deb Polson, a specialist in game design and Senior Lecturer at QUT’s School of Design, this program showcases Hybrid Arcade, where new Virtual Reality works ranging from short film, games and interactive museums can be experienced on special headsets or oculus. Another part of the program, Hybrid Masters, features distinguished individuals and communities from across the region in four different panels to discuss how gaming and cinematic concepts and technologies are being merged to create hybrid experiences. There is also a special workshop, Hybrid Labs -The Monster Zoo, where kids from 6-12 years old can experience Augmented Reality filmmaking (Hybrid Labs price: $25, per child).

A free family community screening of this year’s popular family film Oddball (Australia) will take place at The Courier-Mail Piazza, South Bank Parklands on Saturday 28 November with activities from 5.30pm.

ABOUT BRISBANE ASIA PACIFIC FILM FESTIVAL (BAPFF)
Founded by the Asia Pacific Screen Academy and Screen Queensland, the Brisbane Asia Pacific Film Festival (BAPFF) proudly presented by Treasury Casino and Hotel, celebrates cinema at its best in Brisbane this November. Driven by Brisbane City Council and delivered by Brisbane Marketing, BAPFF treats film fans to some of the most outstanding cinema from our region from Thursday 19 to Sunday 29 November. Now in its second year, BAPFF boasts 102 award-winning features, documentaries and shorts from here and abroad, in a program packed with gala screenings, special guest appearances, and retrospectives. BAPFF will also offer Brisbane audiences a rare chance to see a selection of the nominated films from the 9th APSA, the region’s highest accolade in film, held at Brisbane City Hall on Thursday 26 November.