Baz Luhrmann Bronx dance moves entertainment New York GOSSIP hip hop Netflix the get down by Caroline Russo | on September 18, 2016 | 0 comments | in Interviews | Like it Baz Luhrmann Brand New Series “The Get Down” and Dancer Alfred Pollo Perez Gives Us The Inside To the series.

“The Get Down” is a 12 episode Netflix Original series created by, Baz Luhrmann which went to air this August. Set in 1977, The Get Down is a rhythmic drama that gives an insight to how hip hop began, deep in The Bronx, New York.

The story follows a group of street kids trying to find their place in the world. Ezekiel “Zeke” Figuero (Justice Smith), a talented teen determined to make something of his life. He’s in love with Mylene Cruz (Herizen Guardiola), the girl with the strict, religious upbringing with a killer singing voice who wants to get out of The Bronx and make it as a disco star. Shaolin Fantastic (Shameik Moore), the wild, unpredictable street kid who wants to make noise as a DJ. Some of the stars are Jaden Smith, Jimmy Smiths, Justice Smith, Giancarlo Esposito. Nelson George and Grandmaster Flash, executive producers for the Netflix original series “The Get Down” and creator Baz Luhrmann appear at a press day in London, England.

Baz Luhrmann captures the essence of hip hop culture from that era and is esamated to have budget of $160 million. It captures the look, the feel, the music, the dancing, the gangs, the drug wars, the graffiti, the DJs, the danger and the struggle. The authentic Bronx footage from the 1970s shown throughout the episodes is also quiet a visual treat! And of course, it wouldn’t be a Baz Luhrmann creation without a love story. With the help of hip hop music pioneer, Grandmaster Flash and leading choreographers Rich + Tone Talauega who worked alongside The King of Pop, The Get Down is a fantastic celebration of the 70s music and dance scene. The series is bursting with incredible dance parties (everything from hip hop to disco), DJ and Bboy battles, and all your favourite hits from the 70s plus some new brilliant mixes.

Dancer / Bboy Alfred “Pollo Perez, aka Bboy Pollo worked on the series as the main actor’s dance double (also a member of worldwide hip hop crew “MZK”), is currently in town and Hush Hush Biz has caught up with him as to his role and experience with watching Baz work!

What did you do on the show?

“I am the dance double for Shaolin Fantastic, a dancer in the party / DJ battle scenes, and also various other minor roles such as singing in the choir etc.”

What was it like to work on The Get Down with Baz Luhrmann?

“It was an honor. Being around people like Rich and Tone, Kurtis Blow, Nelson George, Grandmaster Flash… people who I’ve looked up to… They’d always have inspiring stories to tell. As for Baz Luhrmann, his presence was always felt, whether you were in the same room as him or not. He puts a lot of passion into what he does. In our rehearsal space, Baz had vintage photos all over the walls that dated back to the early 70s of New York gangs, the LGBT community, the disco scene and the hip hop scene.” 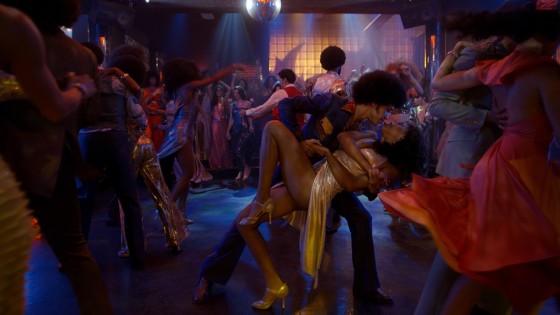 How was it working with Rich + Tone Talauega?

“It was a maturing experience. They take their work seriously and as a result, that made me step up my game. It was inspiring to see how well they knew the history of dance, so many different styles and era, so full of knowledge! They were always open to teach me something and answer any questions I had. Very inspiring people.”

What are you doing now and what are your plans for the future?

“Right now I’m focusing on working on my craft and also passing on my knowledge of dance through teaching. I am teaching classes and workshops around Brisbane & Gold Coast areas and also held a workshop recently in Melbourne which had a great turn out! I also just dropped my first dance short film “Give It Up Or Turn It Loose” which I directed and choreographed (it can be found on Official Pollo Youtube channel). In the future, I would like to get myself more into the acting scene, continue being a Bboy and keep growing artistically.”

Catch Part 1 (first 6 episodes) of “The Get Down” now on Netflix! Part 2 coming soon!