Sony Music Entertainment Australia is excited to announce that US-born singer/songwriter, Bielfield has today released his latest video for ‘Boom And Bust’, the title track off his upcoming EP, which is available to pre order now.

‘Boom And Bust’ is the latest pop offering from the provocative Bielfield, who released his debut single ‘Frequency’ in September last year before following up with the LGBT anthem, ‘Kings & Queens, performing across various stages at the Sydney Gay & Lesbian Mardi Gras 2016. Producer/songwriter Louis Schrool praises the uniqueness of this project. “Bielfield’s vocal ability is like no other. He’s got 5 octaves, so he can literally sing anything. It’s a joy to work with someone that talented. I don’t think I’ve ever heard a man singing whistle-tone, but that’s exactly what he does…It’s quite simply unbelievable.”

Living in his ‘adopted-home’ of Sydney since early 2015, Bielfield has spent time developing his pop musical-identity.
     
Born and raised in Miami, Florida, Bielfield is a self-confessed pop fanatic who’s written and performed pop music from an early age. Recognised for his musicality and talent, he went on to attend New York University as an Undergraduate, before attending the prestigious Juilliard School for his Masters Degree.

Still embracing his classical roots, Bielfield performed as the lead tenor at Opera Philadelphia for their productions of ‘Double Exposure’ and ‘Elizabeth Cree Workshops’ at the end of May and most recently performed at L’Arsenal in Montreal in the Opera ‘Le Vin Herbé’.

“It took a long time for me to work out the right style of music for me… The truth is, despite my classical training, the only music I really sit down and listen to is pure pop, R&B and rap music…I finally let my mind and creativity free, to become more myself – set loose the beast inside – and discovered a world of music I had only ever dreamed of creating.”

 You can catch Bielfield performing live to launch his EP BOOM AND BUST on Friday July 8th at Arq, Sydney and if you’re in Cairns, the American pop sensation will be performing at the annual Admit Love party* on July 23rd.

*The official after party of FNQ Film Festival proudly presented by FNQ Magazine and the HIV Foundation Queensland, raising funds and awareness for the End HIV by 2020 campaign. 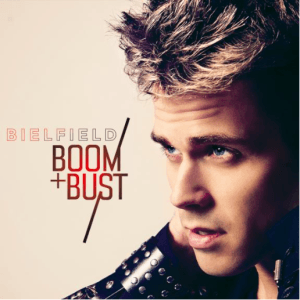