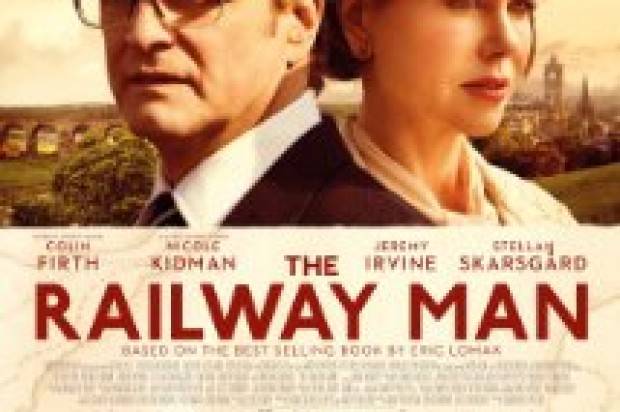 The Brisbane International Film Festival launches with The Railway Man and 12 Years A Slave bookending an esteemed program
The Brisbane International Film Festival (BIFF) today unveiled its 2013 program showcasing the best of contemporary world cinema with 137 feature film titles, including 45 Australian premieres, being screened over 12 days from 13 November until 24 November 2013.
BIFF Festival Director Jennie Hughes said, “BIFF opens on 13 November with the Australian premiere of the international production, The Railway Man. Starring Nicole Kidman and Colin Firth, this Opening Night screening of The Railway Man is made even more special in that it was filmed on location in Ipswich and around the Gold Coast.”
The Railway Man is based on the moving memoir of Eric Lomax, a former British Army officer captured by Japanese forces in World War II, and sent to a POW camp on the Thai- Burma Railway.
“The Railway Man, produced by leading Gold Coast producer Chris Brown, attracted significant interest at the 2013 Toronto International Film Festival culminating in a US deal with The Weinstein Company for North American rights.”
Ms Hughes said BIFF would close with 12 Years A Slave, a compelling film based on the autobiography of Solomon Northup and produced by Brad Pitt, which tells the story of a free man kidnapped and then sold into slavery in Louisiana in 1841.
Directed by Steve McQueen (Hunger, Shame) and produced by Brad Pitt, 12 Years A Slave won the People’s Choice Award at the recent Toronto International Film Festival, one of the most prestigious film events in the world.
“The performances of Chiwetel Ejiofor, Michael Fassbender, Brad Pitt and Lupita Nyong’o are receiving so much attention on the international stage and it is now Brisbane’s turn to get in on the conversation,” added Ms Hughes.
Other big announcements today include some high-profile international guests:
“Stevie Nicks will attend the Australian premiere of her documentary film, In Your Dreams – Stevie Nicks, which she made with Dave Stewart about the recording of her 2011 album of the same name. Fans will have the opportunity to hear Stevie in an intimate Q&A following
the screening.
“Other big names to be coming to Brisbane include Linda Blair for the 40th anniversary screening of the 1973 classic The Exorcist including another Q&A opportunity for fans.”
BIFF will also screen special retrospectives from international and local celebrated filmmakers including a focus on acclaimed Australian director Fred Schepisi and Merchant Ivory Productions.
“We are honoured to be welcoming Fred Schepisi to our festival, a man who has inspired audiences and filmmakers across the globe for decades with his remarkable body of work plus Merchant Ivory’s Paul Bradley.”
BIFF Festival Director, Jennie Hughes, said that this year’s festival would screen films that were highlights on the prestigious international film festival circuit.
“BIFF’s extensive slate includes the winner of the Palme d’Or at this year’s Cannes Film Festival, Blue is the Warmest Colour, All is Lost, which stars Robert Redford and Alex Gibney’s 2013 American documentary film The Armstrong Lie.”
This year BIFF is proud to announce the 2013 festival is expanding its venues expanding on audience reach and accessibility to the Brisbane audience. Alongside the 137 features BIFF is screening 45 short films and will be screening at: Gallery of Modern Art (South Bank), Palace Barracks (Paddington), Palace Centro (Fortitude Valley), OpenAir Cinema (South Bank), Event Cinemas (Myer Centre Brisbane CBD), Dendy Portside (Hamilton), State Library of Queensland (South Bank) and the Northshore Containerval Festival (Hamilton.)
As well as an extensive screening program, BIFF is the annual platform for Screen Queensland’s comprehensive industry program presented in association with Screen Industry Guilds, Walkley Awards, Griffith University and the Intellectual Property Awareness Foundation.
The Brisbane International Film Festival (BIFF) presented by Screen Queensland is being held at venues across Brisbane from November 13-24 2013. For more information, please visit www.biff.com.au

Opening Night: The Railway Man
The Brisbane International Film Festival will get off to an extraordinary start with the AUSTRALIAN PREMIERE of The Railway Man. The Railway Man, starring Nicole Kidman and Colin Firth, is based on the powerful and true story of former British Army officer Eric Lomax tortured while building the infamous Thailand-Burma ‘Death Railway’. Directed by Jonathan Teplitzky (The Burning Man), The Railway Man is produced by Gold Coast producer, Chris Brown along with UK producers Andy Paterson and Bill Curbishley. Boasting an all-star cast with Nicole Kidman, Colin Firth plus Stellan Skarsgard and Hiroyuki Sanada, The Railway Man is partially shot in Queensland.
JONATHAN TEPLITZKY and CHRIS BROWN will all be walking the red carpet at GOMA for the BIFF AUSTRALIAN PREMIERE screening of The Railway Man.
BIFF opens simultaneously at the Queensland Art Gallery | Gallery of Modern Art Australian Cinèmathèque plus the Palace Barracks on Wednesday 13 November, 6.30pm, followed by an after-party at GOMA. Tickets available for purchase for Palace Barracks only. BIFF Opening Night is presented by Audi.