Bliss takes up the Great Australian Bake Off challenge Premiers Tonight on NINE. 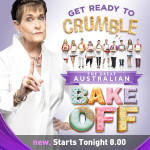 Bliss takes up the Great Australian Bake Off challenge

Tonight at 8.00pm Channel Nine  with Shane Jacobson and Anna Gare as hosts of The Great Australian Bake Off, with Dan Lepard and Kerry Vincent joining them as judges in the search to find Australia’s Best Home Baker.

Australia will join young, vibrant Gold Coaster Bliss Nixon tonight on her quest to become the best home baker in OZ when Channel Nine’s The Great Australian Bake Off goes to air at 8pm.

Bliss competes with nine other contestants on the show in a series of baking challenges over eight weeks under the watchful eye of celebrity hosts Anna Gare and Shane Jacobson.  All the contestants’ will be doing their best to impress the who’s who of the baking world – judges Kerry Vincent and Dan Lepard.

Blonde, brown-eyed Bliss is sure to charm viewers with her sporty, girl-next-door looks and vivacious, if not tenacious spirit that bubbles just under an easy going manner.

The 24-year-old former Coomera Anglican College student and now Performing Arts teacher at Alexandra Hills TAFE admits she has drawn on such qualities to achieve every ounce of success she can muster on the show.

“The competition is just so intense,” says Bliss. “I compare it to a game of tennis, which is my favourite sport to play.

“Every day that I play tennis is a good day for me!” But with baking  …. if you just miss one ingredient everything is ruined.”

So why did Bliss want to take up The Great Australian Bake Off challenge?

“I love cooking, baking and eating all baked goods,” she says. “When I bake for my friends they tell me I am good at it!” “Baking is usually relaxing for me.”

“My first baking experience was with my Mum making cupcakes!”  “Mum and I have always enjoyed baking together.”

“I also have a keen interest in the television industry.” “My big dream is to become a television presenter.” “So when I saw the advertisement for auditions for the show I decided to have a go.”

While admitting she loves an adventure, Bliss says she was aware she had thrown herself into the deep end with The Great Australian Bake Off.

Yet, if her young life’s experience has taught her anything, Bliss says it is to go the distance and make the most of it.

Traveling to the US in 2007 at the age of 18 to take up a tennis scholarship in California, Bliss also completed a Bachelor Degree in Drama and Music at Loyola Marymount University. She knows how to handle demanding schedules and competition.

Putting the option of a tennis career behind her, Bliss returned to Australia late in 2010. She began working at various jobs over the next 12 months from performing in fright nights at Movie World, to administration roles in the Construction industry and asTeam Coordinator for Westfield Retail Design Team before landing her first professional role in a musical called Cut and Dried at the Stage Door dinner theatre in Bowen Hills.

Then in 2012 Bliss applied to do a Post Grad course at QUT in Secondary Education to enable her to teach performing arts. She understands having to be flexible and disciplined.

However, one of the biggest challenges for Bliss on the show is a very personal one. “I have Celiac disease and cannot eat wheat” she reveals. “So it is deciding whether to follow traditional recipes baked with wheat flour or stick to gluten free.”

“I know how difficult it is for people like me that can’t eat wheat products to find good gluten free recipes.”

Bliss sums up the competition as amazing.

“Some of the contestants are so talented, just amazing, and should be working in Patisseries.” “They are all very different.”  “Some are highly competitive and perfectionists and others are more relaxed and just so much fun.”

Without giving too much away, Bliss says she has her share of stellar moments, as well as some near disasters which played havoc on frayed nerves on the eight-week series. “I can tell you there was a bit of lemon curd flying everywhere at one stage,” laughs Bliss.

Bliss also commends The Great Australian Bake Off for being different than other cooking shows because it focuses more on the talent and skills of home bakers, rather than personality clashes.

As for the judges, Bliss says we will have to wait and see, but definitely everyone will be on tenterhooks.

Full of energy and never short of a word, Bliss will no doubt keep us all entertained through laughter and tears, triumphs and trials and the camaraderie of her doughy-fingered foes.

The show, based on The Great British Bake Off TV Series phenomenon that began on BBC TWO in 2010, was filmed on the grounds of the historic Werribee Mansion in Melbourne early this year. The Great Australian Bake Off will showcase extraordinary contestants competing to deliver outstanding bakes in three increasingly difficult challenges based on a different baking theme each week.