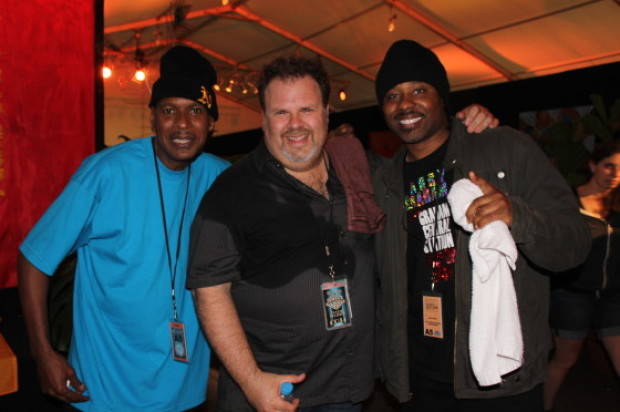 25th Anniversary Bluesfest, Australia’s multi award winning five day festival was held over the Easter long weekend at its home, the Tyagarah Tea Tree Farm. The festival wrapped up last night after five days of clear blue skies, show stopping performances from some of the world’s most prolific and up and coming musicians and some jaw-dropping collaborations.
Festival Director Peter Noble said:
“This is, without doubt our most successful one yet. How perfect were the artists? How perfect was the weather? The blend of artists from contemporary to classic and from young to old was easily the best we have ever had, gee I would like to have a dollar for every artist who announced on stage this is their favourite or best festival in the world. It was a pleasure from beginning to end.
This is our equal biggest festival or the biggest yet, we will work through all the numbers and make an announcement in the coming days. 1054 workers and 500 volunteers worked more than 12,500 hours over the festival to make it the success that it was.
One thing is for sure, we are thrilled, energised and inspired to get out there immediately and start working on our 2015 event, our 26th Annual Bluesfest to be held on 2nd -6th April 2015.”
Music Highlights:
It became clear that Bluesfest 2014 was a festival for music lovers and the eclectic line-up attracted a crowd of all ages. 107 artists performed over seven stages for a total 13,350 minutes. Bluesfest proved that everyone under 70 came out as a closet KC & The Sunshine Band fan on Monday night as full tents of over 10,000 people danced away to hits such as “Get Down Tonight” and “I’m Your Boogie Man” “Please Don’t Go”.

Bluesfest 2014 was filled with guest appearances and some notable ones included crowd favourite Joss Stone performing “I Put a Spell On You” with Jeff Beck, Warren Haynes of Gov’t Mule joining the Dave Matthews Band to perform Jimi Hendrix’s “All Along The Watchtower”.
Xavier Rudd jumped on stage for Nahko and The Medicine People’s Sunday set. Jurassic 5 MC Chali 2na joining WAR on stage, Bernard Fanning joining Kasey Chambers, Henry Wagon getting up on stage with Michael Franti and India.Arie with Playing For Change were some of the other surprise guest appearances.
The Dobbie brothers another band that just rocked the crowd and Bozz Sags.
Birthday Celebrations:
There were cakes and speeches aplenty at the 25th Anniversary of Bluesfest. On Sunday night, Festival Director Peter Noble, Festival Manager Annika Oman and many of the Bluesfest staff joined Playing For Change on Stage to sing a Happy Birthday and share some cake with the crowd. Other Birthday surprises included the Music Maker Foundation debuting a brand new song titled “The Peter and Annika Byron Bay Bluesfest Boogie” which was a perfect end to the Birthday celebrations.

Bluesfest Sideshows: Bluesfest may now be over, however we still have a bunch of our artists on the road for Bluesfest sideshows. For those who missed out or those who want another dose of Bluesfest visit www.bluesfesttouring.com.au.
Early bird tickets to Bluesfest 2015 will be on sale at www.bluesfest.com.au or by phoning the office on 02 6685 8310