The magnificent  Surfers Paradise Marriott Resort and Spa which had not long ago been refurnished at a cost of $20 million  was a fitting venue to welcome former Hollywood based film producer and former Disney executive, Bobby Galinsky and a full house of  established and aspiring filmmakers and actors who came locally and from afar to attend the long awaited popular Bobby Galinsky Masterclass.

The rare event was so newsworthy that Bobby Galinsky’s visit was covered by the Channel 9 Gold Coast Evening News on the following night,

The much sought after seminar giver and film guru flew in from Melbourne to do his masterclass focussing on the essential tools on how to raise finance and get the green light for new movies being made and released on the big screen.

Caroline said:  “This was a powerful day of rare information and to spend a day with an executive producer and screenwriter who had accumulated over 30 years experience in the business which included  a post with Disney and  who will be firing up two major feature films for consideration of  shooting on the Gold Coast next year thereby creating lots of jobs and profiling the Gold Coast  as a potential mecca for filmmakers and a viable alternative to Hollywood in 5 years time if not sooner”

There was a great buzz in the room on that day created by what trade secrets the great filmmaker generously shared.  And he was keen to do an encore and follow up in November.

Already from last Sunday Galinsky said he could see a lot of film projects that were shared on the day that  could  immediately be happening if the little known financing and distribution side of things could be done right.

Already the feedback that have already come in to Caroline have been very positive and encouraging thus making it completely worthwhile for Caroline Russo who worked so hard to get the event off the ground.  She said:  “There was a real possibility of a blockbuster or two amongst the pitches in the room on that day of the masterclass.”

Overall, it appeared that the masterclass had indeed inspired many to go ahead with their story concepts or that connections and foundations have been established amongst  the pioneers of other film projects generating a powerful synergy that could only lead to eventual success. The bonus was that it was also a fun day for people to mix and mingle.  For lunch they all enjoyed the beautiful Marriott hot and cold buffet sitting together in one section of the new Citrique Restaurant .  The mini “after party” in the resort’s Lobby Lounge Bar rounded off a fabulous day in Paradise. 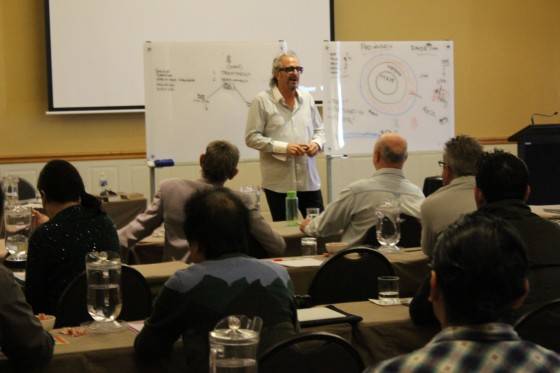