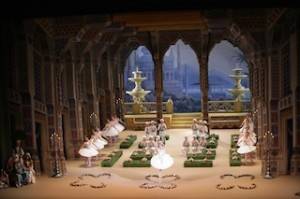 THE BOLSHOI BALLET LIVE FROM QPAC 2013

Audiences across Queensland will have the chance to experience the grandeur of Russia’s Bolshoi Ballet via live simulcast from the Queensland Performing Arts Centre (QPAC) on Tuesday 4 June 2013.

The Bolshoi Ballet will present two productions, Le Corsaire and Dmitri Shostakovich’s The Bright Stream, which have never before been performed in Australia, both accompanied by the Queensland Symphony Orchestra.

The Bolshoi Ballet has not visited Australia in almost two decades and they are performing exclusively at QPAC as part of the QPAC International Series, a partnership with Tourism and Events Queensland to bring the best companies in the world to Queensland.

QPAC Chief Executive John Kotzas said this simulcast will be the first ballet to be simulcast by QPAC and will go to eight regional centres around Queensland. It follows on from previous successful simulcasts of performances by Opera Australia, Hamburg Philharmonic Orchestra with the Hamburg State Opera and the Vienna Philharmonic Orchestra.

Mr Kotzas said “the Bolshoi Ballet is one of the biggest and most well-known performing arts companies in the world. Many people will no doubt be excited to see them perform.

“Our research has shown that audiences feel a strong sense of being connected to the live performance even though they may be halfway across the state. QPAC’s live simulcast program is an important part of how we engage with regional audiences and how we can ensure that exclusive performances such as this one by the Bolshoi Ballet are seen by as many people in Queensland as possible.

“This is QPAC’s fourth live simulcast and the first time we’ve presented a ballet. There are many people on stage and off who make these simulcasts memorable for our audiences. Aside from the dancers and orchestra members you see, there an expert team of directors and crew that craft the experience for the audience.

“In many ways audiences get a more intimate look at the production than they would if they were in the theatre. And with a production like Le Corsaire which is a huge ballet with massive and intricate sets, regional audiences will be able to see those sets and dancers up close and in detail,” said Mr Kotzas.

In previous years live simulcasts as much as doubled the number of people able to experience the performance.