For men of any age the most common concerns include exercise, diet, sleep, work, relationships, sex, stress, mental health and body image. Using his expertise as a scientist, as a doctor and as a man, Dr Andrew Rochford has combined current scientific knowledge with the practicalities of life to create a frank and straight-to-the-point guide for the modern man.
Dr Andrew’s message is that in a time when everyone is trying to sell you something—how to live longer, have better-looking skin or be better in the bedroom—it’s okay to admit you aren’t perfect. But how do we overcome the mistakes we all make to become a better non-perfect version of ourselves? In entertaining and informative style learn how to take a different approach with tips that will help you to make the better decision the majority of the time so you can enjoy each day and live it in a healthier way. Cars in Cuba You Should See Before They Die
The streets of Cuba are filled with a magnificent collection of unique cars which reflect the island’s dramatic heritage and decades of isolation. Cut off from the world of modern transportation, the Cubans have been forced to make the most of their limited resources.
The result is an astonishing array of vehicles—from outlandish automobiles which seemingly defy belief, to other models of majestic beauty, lovingly restored with outstanding ingenuity.
‘Cars of Cuba’ captures the glory of these kings of the road, before they disappear as a new wave of change sweeps across the country.Kim Buddee

About the Author: Production Designer APDG (the Australian Production Design Guild) Kim Buddee is best known for his work on feature films like Lantana (AFI Nomination Best Production Design 2001) and popular shows for television (So You Think You Can Dance, Celebrity Apprentice, Australia’s Got Talent, Ninja Warrior etc). In 2001 he wrote the novel, Fugitive Identity. In early 2012, he travelled to Myanmar to photograph the capital Yangon before the impact of the ‘Burmese spring’ would see this historic city and its people changed forever. The result was his book Once Was Burma. In 2015 and 2016 Kim went to Cuba, gathering material for his forthcoming book The Cuban Evolution, which captures Cuban culture, architecture, people and the history on the brink of a new era. It is being published by Schiffer Books. Kim was originally an architect, grew up in Perth, WA and significantly, his father drove a green 1953 Ford Customline. Rugby league legend Darryl Brohman pulls on his apron, fires up the barbeque and blends his favourite barbeque recipes and league stories.
The Big Marn, star of the Channel 9’s The Footy Show, shows us how to prepare for the barbeque season, has plenty of ideas for feeding a scrum, picks his favourite wings and introduces us to his barbeque immortals.
The Big Marn’s Barbecue Cookbook is informative, colourful and entertaining – just like Big Marn himself! 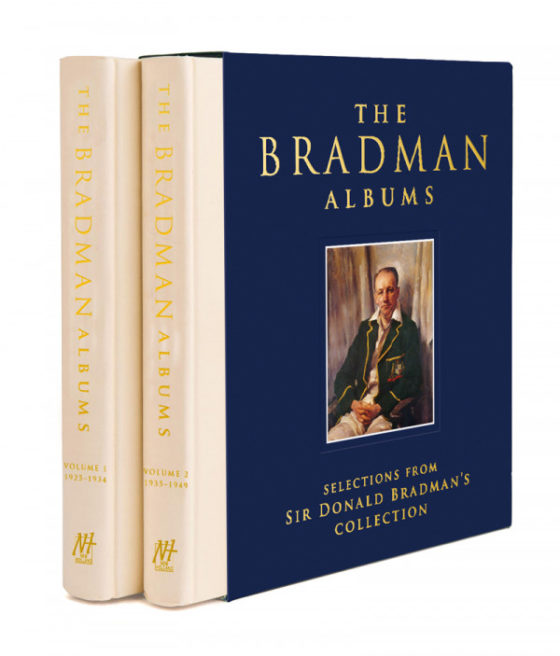 Sport is such an important part of our national identity that is hardly possible that a sportsperson can come along and transcend the sport they play. But it does happen … every generation or so, someone comes along with skills so finely tuned, that they change the game they play and forever become synonymous with that sport. More than that, their skills and attitudes come to symbolise that sport. For millions of people in Australia and around the world ‘The Don’ was Australian cricket. Sir Donald Bradman was, beyond any argument, the greatest batsman who ever lived and the greatest cricketer of the 20th century. In that time, his reputation not merely as a player but as an administrator, selector, sage and cricketing statesman only increased. His contribution transcended sport; his exploits changed Australia’s relationship to what used to be called the “mother country”. Throughout the 1930s and 40s Bradman was the world’s master cricketer, so far ahead of everyone else that comparisons became pointless. In 1930, he scored 974 runs in the series, 309 of them in one amazing day at Headingley, and in seven Test series against England he remained a figure of utter dominance; Australia lost the Ashes only once, in 1932-33, when England were so spooked by Bradman that they devised a system of bowling, Bodyline, that history has damned as brutal and unfair, simply to thwart him. He still averaged 56 in the series. The return of the best-selling albums featuring selections from the personal collection of the famed cricketer. Including rare personal photos, evocative action shots of great cricketing contests and exhaustive captions, match summaries and statistics, The Bradman Albums will introduce the iconic Australian legend to a new generation of fans. Take a journey through the awe-inspiring world of luxury consumer goods, where money is no object and if you need to ask the price then you know you can’t afford it. From cars, planes and boats to watches and clothing, it’s all about quality, luxury, rarity and prestige. Big Boys’ Toys is an inspirational and aspirational look at the absolute best the world has to offer. Sit back and enjoy the ride.
You want this.
You deserve this.
You’ve earned this.