BOOK ALERT SOON TO BE RELEASED WITH SNOOP DOG

books to go celebrity cooks cooking treats snoop dog by Caroline Russo | on August 24, 2018 | 0 comments | in Book Reviews | Like it 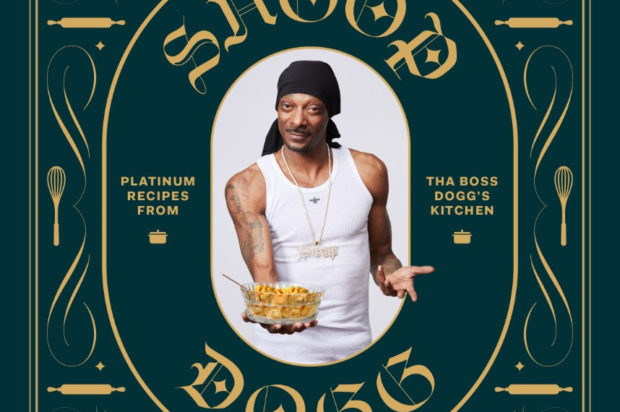 From Crook to Cook Launches on the Heels of the Emmy-Nominated VH1 Cooking Series “Martha & Snoop’s Potluck Dinner Party”.

Today, Snoop Dogg announced his first cookbook, From Crook to Cook, to be published by Chronicle Books, and distributed by Hardie Grant in Australia.
The irreverent cookbook is slated for October 2018 release and will feature 50 of the legendary Snoop Dogg’s all-time favorite recipes straight from his personal collection.
“You know it’s blazin’ up in my kitchen. I’m takin’ the cookbook game higher with a dipped and whipped collection of my favorite recipes, ya dig?” says Snoop Dogg.

Organized by meals and occasions, the recipes will range from OG staples like Baked Mac & Cheese, Chicken and Waffles, and Baby Back Ribs to upper echelon fare such as Lobster Thermidor and Filet Mignon. Weeknight favorites like Soft Flour Tacos and Chicken Caesar Salad will have readers turning to Snoop any day of the week. And of course, the book would not be complete without a Gin and Juice recipe and snacks to satisfy those munchies. Full of Snoop’s trademark personality, his debut cookbook is brimming with delicious cannabis-free recipes and entertaining ideas from the beloved rapper and celebrity.

Snoop Dogg first showed the world his cooking chops when he guest-starred on Martha Stewart’s show, Martha, in 2008. The dynamic duo are appearing in their Emmy-nominated Martha and Snoop’s Potluck Dinner Party on VH1, which is currently airing its second season.

“Snoop Dogg and Chronicle Books are about to Snoopify the cookbook world and kitchens around the world,” said Christine Carswell, Publisher of Chronicle Books. “Snoop’s book is full of his iconic creative energy – it’s as much fun to read as it is to cook from.”

“Creating this book together has been a total trip, and I can’t wait for everyone to start cooking with Snoop this October.” said Camaren Subhiyah, the Senior Editor who acquired the title for Chronicle Books.

The collaboration with Snoop Dogg and Chronicle Books doesn’t end here. Through a partnership with his media startup MERRY JANE and Chronicle Books, they will launch a line of cannabis-themed books together with an expected roll out of Spring 2020.

About the Author
Snoop Dogg is an entertainment icon that has reigned for more than two decades as an unparalleled force. He has raised the bar as an entertainer, paving the way for many artists and is recognized as a global innovator. Snoop Dogg is at the forefront of popular culture with his award-winning music, film and tv roles–both in front of, and behind the camera–entrepreneurial ventures, and philanthropic efforts.

Snoop Dogg defines entertainment and hip-hop history. He is a Grammy Awards nominee who has set records with his debut album, Doggystyle, which debuted at #1 on the Billboard 200 chart. Throughout his career, Snoop’s chart-topping hits include; “Gin & Juice,” “Who Am I? (What’s My Name?),” “Nuthin’ But A ‘G’ Thang,” “Next Episode,” “Beautiful,” “Drop It Like It’s Hot,” “Signs,” “Sensual Seduction” to “I Wanna Rock” and “Young, Wild and Free.” As a trendsetter of pop culture, Snoop’s ventures include: multiple music/film/TV deals, his WestFestTV YouTube channel and MERRY JANE, the fastest growing media platform at the crossroads of pop culture, business, politics, health, and the new generation of sophisticated cannabis culture for all. Snoop recently released his hit Gospel album, Bible Of Love, which stayed at #1 on Billboard charts for seven weeks. Known for his smooth and charismatic personality, Snoop Dogg is an Emmy-nominated host of VH1’s Martha & Snoop Potluck Dinner and the host of TBS’ Snoop Dogg Presents The Joker’s Wild.