Book Review: A Treasury of Cartoons 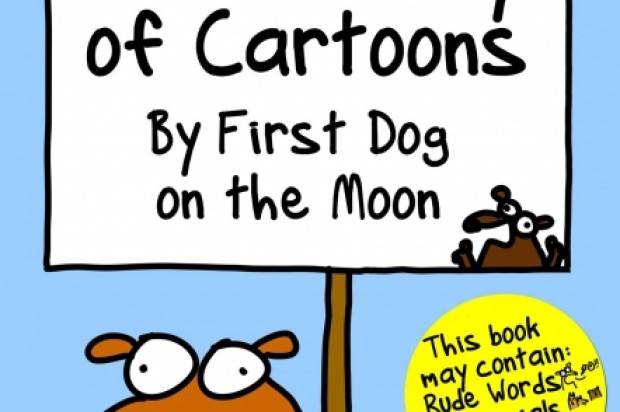 First Dog on the Moon is Guardian Australia’s wildly popular political cartoon series, with a growing reputation online for its irreverent, left leaning conversations about issues impacting Australia and the rest of the world. Created by Walkley Award Winner Andrew Marlton, the series has gone from a quirky few panels online to a beloved institution with a range of merchandise and public speaking events. Though there are a range of clothes, magnets, and even a calendar, A Treasury of Cartoons is the first printed collection of Marlton’s work.

Whenever you discuss the political leanings of a pundit, there’s an assumption that the commentator only targets one side of politics, while ignoring the failings of their own preferred party. While First Dog on the Moon is left leaning in its ideology, at least part of its popularity comes from Marlton’s belief in giving a full coloured, illustrated butt-kicking to anyone he sees as deserving of it, regardless of their political affiliations. It’s a strange notion that such simplistic imagery has become a rallying point for a range of people unimpressed with the direction their country is moving towards. And yet, it’s that simple styling and earnestness that gives the work it’s emotional punch.

It’s fascinating to see the development of the imagery away from short joking comments towards the now infamous, and well-loved dissents into longer format conversations. Marlton treats A Treasury of Cartoons as a memoir in a way, using the book as a conversation piece in its own right, and giving readers a glimpse into what was happening at the time, and how the different cartoons came to be.

Marlton’s pieces of political ephemera have long been used in classrooms to try and explain complex political issues in engaging, easy to understand ways. Marlton’s ability to take the monumental issues of the day and boil them down to their bare essentials, cutting away the political jargon and fear-mongering to focus on the actual facts at hand, has seen him become a powerful political voice in Australia.

If you have relatives prone to a rant about the left wing-ers of the world, this might not be the book to have sitting on your coffee table when they visit. At least, if you’re not amused by ranting. If you’re a fan of political discourse, or of current Australian events more generally, this is a great read for an alternate viewpoint on Australia’s current moral climate. But it’s also a lot of fun. In the end, a lot of the success of Marlton’s work comes down to his ability to take complex issues, and make his discussions interesting, engaging, and enjoyable. Sometimes, to be able to think about a problem, you need to be able to laugh at the absurdities surrounding it.

A Treasury of Cartoons is published by Harper Collins Australia, and is available through the publisher’s website, and through leading booksellers nationwide and online.