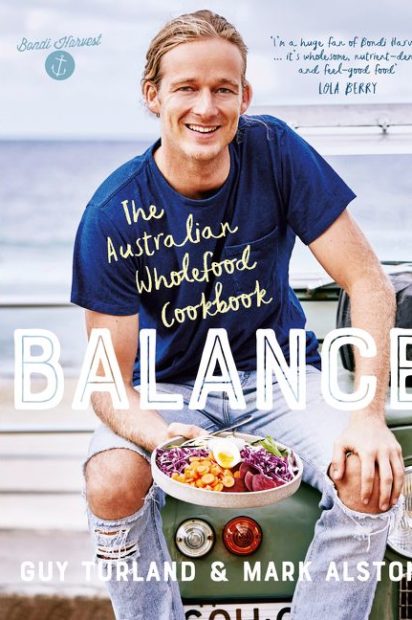 Cookbooks are a balancing act. You want food that’s possible for the average cook to prepare, that falls within a certain niche of cuisine. Readers tend to have expectations when it comes to every book. Sometimes it works, sometimes it really doesn’t.

‘Balance’, for the most part, ticks the boxes. It’s title lets you know exactly what you’re in for (healthy, wholesome, wholefood), with enough hipsterish elements to let you know that you’re in for a trendy encounter with the kitchen. Given it’s by the Bondi Harvest blokes, Guy Turland and Mark Alston, you know you’re in for healthy, beachy foods.

The recipes themselves are healthier, super-foodier versions of some classic family favourites, given the hipster twist. If you love kale and quinoa, you’re in for a treat here.

There are also recipes that are a little bit baffling. I’m not sure, for example, why you’d put olive oil in your morning juice. And if you’re not a fan of kombucha’s gelatinous elements, this might not be the best book for you.

Overall, though, the niggling issues with ‘Balance’ add up to a vaguely frustrating read.

I’m not a fan of throwing in pointless photos- there are only so many women in bikinis I need in a cookbook, and truthfully, that number is zero. It feels at times like they’ve confused their cookbook and their Instagram feed, and we’re ‘treated’ to a slew of images of the guys hanging with their friends, surfing, surfing the net, their flippers, and my personal favourite, random buildings.

But on top of that, there’s issues with labelling dishes when there’s multiple similar ones presented on a page (probably to make room for a photo of their mate playing the ukulele?), which is great if you love a game of ‘guess the dish’, but less great when you actually want to know what something looks like- or worse, you’re not sure what an ingredient it in the dish but it looks gross and you probably won’t eat/drink it. There are random elements added in for the photos, too, that aren’t in the recipes.

This is also a book that’ll irk you if you find yourself frustrated by incomplete ingredient lists. Things like salt, pepper, and water aren’t always included in all the recipes (even though they’re part of the dishes), which, granted, tends to be a source of frustration to me but probably isn’t such an issue to many others.

If you can shrug off the niggling formatting errors, or if you’re a fan of superfoods and kombucha, there’s a really good chance that you’re going to really enjoy ‘Balance’. But for those who are easily frustrated by formatting issues and kale, you might want to give this one a miss.