Book Review: Because You Love To Hate Me

Anthology Because You Love To Hate Me Booktube Kylie Thompson Young Adult by Caroline Russo | on December 17, 2017 | 0 comments | in Book Reviews | Like it 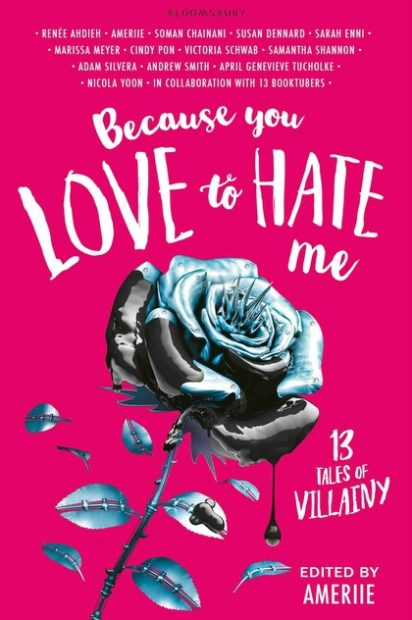 YouTube has become a go-to place for a new breed of YA book reviewing, and if you’ve ever explored the world of BookTube, you’ll know there’s some amazingly passionate lovers of literature making their name on the reviewer scene.

So when a group of BookTubers team up for an epic writing challenge with some amazing YA authors, you know you’re in for a wild ride. The premise is simple: the stories are focused on the villain of the ‘verse, looking at how some iconic villains came to be and how some new villains are roaring into being. And after each author’s work, a BookTuber responds to the story.

‘Because You Love To Hate Me’, by all accounts, should be a solid four-and-a-half star affair. The stories are, for the most part, brilliantly written, and it’s hard not to want to find more of the author’s work. On the whole, they’re compelling, well-reasoned, and viscerally emotional.

There are a few missteps, though that could be chalked up to a matter of reader tastes rather than actual issues with the writing- but if the thought of stories made up of messages with no extraneous detail irritate you, or you rage at gender-flipping iconic characters just to avoid the potential for a same-sex pairing, there are going to be moments that irritate you, I’m afraid.

Overwhelmingly, though, these are fantastic glimpses into new fictional worlds, engrossing enough to settle in and read away the weekend with.

The problem, generally, rests with the commentary that accompanies each story. The BookTubers, who are all highly successful and engaging in a more active form of communication, seem to struggle universally with the written work. The humour that they’re known for doesn’t always work well upon the page, and it can be hard to stay engaged with some of their content.

It’s a shame. In another format- one better playing to the strengths of the BookTubers, this would have been an unmitigated success. But while some certainly rose to the challenge, at times it was painfully clear that this wasn’t a medium they were comfortable with. As someone who loves whiling away time watching BookTuber vlogs, it’s hard not to be a little disappointed here- after all, who doesn’t want to find some new artists to watch?

Having said all that, the point of experimental work is in learning what works, and how. And though there are missteps here, I’d certainly rather see experiments like this continue, even if it takes a while to reach reader perfection. And sure, the commentary might not be something you’ll wander back to re-read, but the stories themselves might well be. If you like your YA experimental, engaging, and exploring the darker side of the story, you’re probably going to really enjoy ‘Because You Love To Hate Me’.