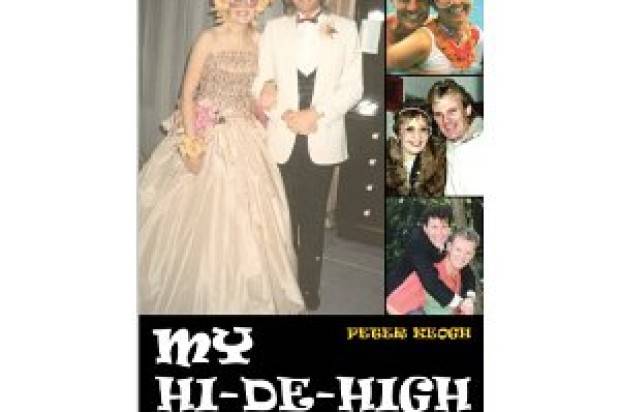 The name Peter Keogh may not be instantly recognisable to many people but he was married to one of the most popular British comedy actresses of the 1980s, Su Pollard. My Hi-De-High Life documents the story of how an unknown gay drifter from Australia came to live the celebrity life in London and mix with some of the most iconic stars of the time. This autobiography details the abuse in Peter’s early life, his struggle to come to terms with his sexuality, different jobs, his travels, involvement with the theatre, tempestuous relationships and subsequent arrival in London, where he met and married Hi-de-Hi star Su Pollard. In this no holds barred account Peter spills the beans on his life with Su, his arrest and trial for theft, meeting Princess Diana and living the high life with well-known household names of the time. He goes on to document his subsequent divorce from Su, living in America and working with film legend Debbie Reynolds. This book is a fast-paced read about Peter’s rollercoaster ride of a life that you won’t want to put down.

Hush Hush Biz QA with Peter Keogh.
1. In writing the book and with writing of your experiences of what you went through in your early years, has this been a good release as in like a healing for you to write your story?

I have to say that it was a cathartic experience because it was just intended to be a bit of an essay to record some of the amazing events in my life but as I started some memories came flooding back that were so traumatic that I had subconsciously buried them. So by writing about them I was able to face them as an adult and move on! However it still hurts a bit thinking about the abuse in particular but not in a debilitating fashion – I felt freer and I guess healed!

2. If you were given a chance to re live anything is there anything you would change?

Probably not because what happened to me then has made me the strong man I am now. I guess just having a bit more confidence would have been helpful – I was so shy – stammered terribly and would wet my pants in class when called upon to answer a question the answer of which I knew but because I stammered I couldn’t get the words out and was ridiculed!

3. Your time with John Frost sounded like it was a very colourful time for you both. Are you still close.

Colourful is an understatement but he was my first true gay love and as such has a special place in my heart, We used to both be very jealous and often ended up sending plates of food flying across the room at each other plus – as mentioned in the book – in the middle of Sydney Harbour Bridge in peak hour we had a fight so he reached over and pulled out the car keys and left me in the car being abused by every car behind me – I just ducked down and hid on the car floor – dying of embarrassment! We are still very close – John asks us to all of his big events and in fact I am having my 70th birthday in August at his and his partner Shane’s beautiful home in Bayview on the north shore overlooking the beautiful Pittwater.

4. Debbie Reynolds has been a huge in your life. Can you share more on any other things here on meeting her and do you stay in touch still now often?

Yes Debbie was my idol from the age of 12 when I saw her in ‘Tammy’ and wrote a fan letter to her which she answered at length and finally met when she first toured Australia in 1978. She asked me to visit her in Hollywood and we really bonded! Touring with her for over a month was surreal! We never slept – talked about everything because she knew and knows everyone in Hollywood so we had some of the most outrageous chat sessions most nights. She is so funny – never gets up till noon and has so much energy – exhausted me. We stay in touch about once a fortnight!

5. You Life with Su Pollard share one of the funny stories here as to fact getting married or the arrest in your life.

Life with Su was a roller coaster ride! People would say that she was ‘like a bee on speed’! One story not in the book was when she dozed of with a ‘happy’ – shall we say – cigarette in her hand and the curtains in our bedroom went up in flames – fire brigade called and everything including us was soaked – the first thing the fire men asked for afterwards was a photo and an autograph of Su! Also getting married twice was unusual to say the least – the first time was not legal because the minster crossed out the original church on the licence because we had to change churches a few hours before the event – all the details in the book! The arrest for stealing was painful beyond words but a letter from the actress Jill Perryman saying that all will be well because – ‘right is might’ – saved the day and as you know I was cleared of the charges! Jill actually came to my book launch here in Perth.

5. If there is something else you would like to do in this life time what would that be Peter.

To be totally truthful it would have to be that I was in a position financially to be able to not have to work and to be able to see some of the countries I have dreamed about ever since I was a boy – and to do it with my partner Sacha! Places like Venice, Rome, Ireland, Alaska and many others – travel business or even first class and not have to worry about staying in lovely hotels etc. Nice to dream! However the fates decreed that not to be so I just make the most of each day and count my blessings of which there are many!

The book can be purchased at the following places e-book format from Amazon, Barnes and Noble and JB Hi-Fi’s online stores.