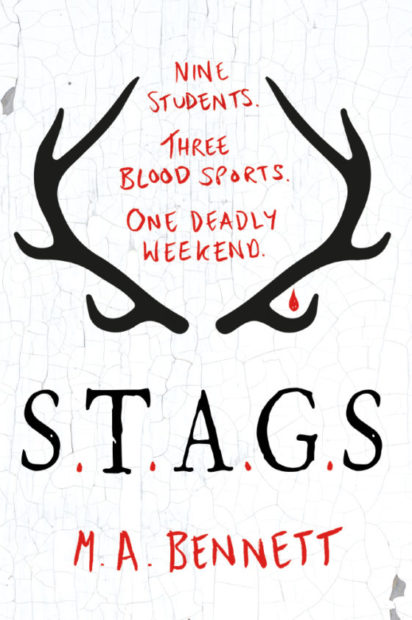 When Greer MacDonald gets a scholarship to the prestigious St Aiden The Great School, she’s thrilled at the chance, if a little nervous. But STAGS, as it’s affectionately known by students, isn’t the safest place for a girl like Greer. After all, this is a school where intergenerational wealth is the key to success, ruled over by the popular kids.

Greer isn’t what you’d call a friend magnet. And yet, out of the blue, the most popular, handsome boy in school sends her an invitation to the most exclusive event of the year- a weekend at the family homestead with Henry and his friends.

It’s the sort of invitation that could change her entire social standing- even her life. So even if hunting, shooting, and fishing isn’t really her thing, of course Greer says yes. But her dreams of an idyllic weekend are about to go terribly, brutally wrong.

‘S.T.A.G.S’ is the sort of book that’s impossible to put down, an edge of your seat roller coaster of a story filled with twists and turns.

Greer makes for a wonderful narrator- flawed in the ways that make her feel real, and without the damsel tropes that get far too big a workout in traditional horror fare. And while she’s certainly capable of making poor choices, it never feels like those choices are there simply to drive the narrative. Instead, it feels like the sort of choices anyone would make, which makes for compelling, uncomfortable reading. And through it all, she gives us just enough information- and sows just enough doubt- to keep readers racing for the truth.

For those who think YA (young adult) fiction is weaker than its adult counterparts, this is a must-read. The premise, after all, would be just as intriguing in general fiction. But the truth is that, increasingly, it’s YA fiction tackling the darker, more difficult subject matter, and exploring and innovating genres. And it’s here that some of the breakaway talents of the literary community are being found.

‘S.T.A.G.S’ may not be your ideal read if the idea of hunting imagery makes you feel ill, and certainly isn’t the book to pack for reading matter on a camping trip. But for lovers of thrills, kick-ass heroines with flaws, and quick pacing that’ll leave you forgetting the world and turning those pages, you’re probably going to want to put it at the top of your TBR pile.

S.T.A.G.S. is published by Hot Key Books/ Bonnier/ Allen & Unwin, and is available through the publisher’s website, and at leading retailers.