Book review: Thanks for the Trouble

adventure coming-of-age love supernatural thanks for the trouble tommy wallach young adult fiction zelda by Caroline Russo | on June 24, 2016 | 0 comments | in Book Reviews | Like it 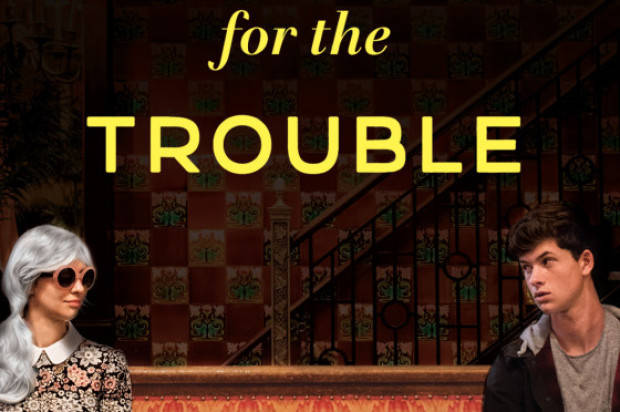 Thanks for the Trouble by Tommy Wallach
Review by Kylie Thompson

Parker Sante is the sort of teenager adults tend to call ‘troubled’. It’s been five years since the wreck that killed his father, and five years since Parker has spoken. In those years, Parker’s life has narrowed down to the pitying stares and whispered comments of the world around him. Silent, though, doesn’t mean saintly. He steals, he swears, he skips school to hang out at hotels (and sometimes steal from the guests).

Zelda Toth is a silver haired girl with a sketchy history, a stack of hundred dollar bills, and a death wish. She’s waiting on a call that will change everything, and not necessarily for the better. Beautiful in her way, Zelda has a gift for anachronistic flair and a belief that she is older than she looks.

When the pair meet up in an old, expensive hotel, it’s not love at first sight. But it is the start of an adventure that will change both of their worlds.

The beauty of ‘Thanks For The Trouble’ is that Zelda and Parker aren’t the perfect figures we tend to expect in fiction. Parker isn’t the stereotypical dream guy- he’s not sporty, nor academic, and he’s hardly the sort to send a room full of girls into a frenzy. Zelda, though beautiful, is quirky, opinionated, and headstrong enough to scare away the majority of potential suitors. This isn’t the story of two perfect souls finding each other; it’s the story of two broken people fighting to make something of their lives, and struggling to be better than their circumstances.

As an author, Wallach has a knack for crafting flawed, vulnerable characters that readers can’t help but love. His heroes are imperfect, and rarely heroic in the way we’d imagine. They’re a sort of every-boy or every-girl, rather than the ‘Captain America’ style, boy-next-door perfection we tend to see overrepresented in popular culture. There’s something wonderful in reading characters that aren’t perfect, aren’t necessarily that morally good, but that are still utterly relatable and sympathetic.

If there was a concern about ‘Thanks For The Trouble’, it was the inclusion of a potential manic pixie dream girl character in Zelda. Zooey Deschanel’s characters tend to be the poster-girls of this trope, where a boy’s humdrum existence is interrupted and irrevocably changed by the arrival of a mysterious, overly perky girl. The manic pixie dream girl exists only to be a cute and quirky love interest, and to tear through the boy’s reality like a particularly sparkly tornado before vanishing once the boy understands that there’s more to life than he’d previously realised.

The manic pixie dream girl is part of a larger trope about the random magicalness of women, wherein women are capable of healing all the ills, and bringing their male counterparts back to their particular path of righteousness, all for no other reason than gender.

Though the healing powers of women is a common trope in fiction, along with the idea that beautiful and mysterious girls are required to inspire the hero to care about or change his life, Wallach handles such overused tropes deftly. It’s not about the healing power of women, not really, so much as an honest reflection of Zelda’s personality. Zelda doesn’t suffer fools lightly, nor does she tolerate anything less than the best from those around her. To see someone refusing to live up to their potential is an insult Zelda cannot allow to stand. Where often manic pixie dream girls are just there, it’s hard not to see Zelda as a young woman with a plan, and a set of standards defining who she’ll accept in her world.

There are moments where Wallach plays perhaps too closely to the negatives of the tropes he’s exploring, and yet, it’s hard not to enjoy ‘Thanks For The Trouble’. It’s fun, and thought provoking, and you can’t help but want to see Parker and Zelda find their happily ever afters, whatever they might be.

There’s potential trigger warnings at play here, due to some of the content, but if you’re looking for a coming-of-age tale with a hint of supernatural flair, ‘Thanks For The Trouble’ might just be the book you’re looking for.

‘Thanks For The Trouble’ is published by Simon and Schuster Australia, and is available at the major physical and e-retail stores.