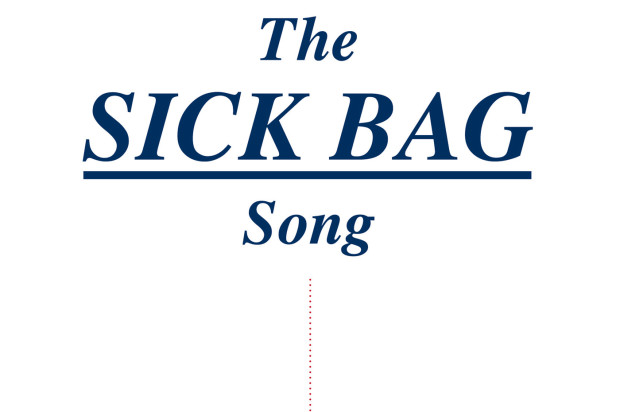 Rating: 4 and a half stars
Genre: memoir, prose, creative non-fiction

Nick Cave is an Australian musical icon, with over 30 years of performing under his belt, and collaborations with some of the biggest names in the industry.
He’s the sort of guy you just know could tell some amazing stories.
When touring North America in 2014, Cave began writing snippets of stories, memories, and inspiration onto the backs of airplane sick bags, taking underappreciated and disposable bits of travel life and reimagining them as canvases for his word-art. As the collection of bags grew, those snippets evolved into ‘The Sick Bag Song’.
Nick Cave has a reputation for pushing boundaries and blurring distinctions between genres, and he’s certainly done so here. ‘The Sick Bag Song’ isn’t your typical tour diary or memoir piece, written with a clear narrative intent and the typical soothing predictability. Instead, it’s a gathering of surrealist fantasy juxtaposed with reality, written in prose with the occasional dash of typical narrative or musical analysis.
It’s hard to know how much is real, how much fact is being retold as fiction, and how much is the exhausted imaginings of a man finding his feet in a stressful environment, and the line between memory and imaginings is toyed with expertly throughout ‘The Sick Bag Song’. Whether deliberately or not, Cave has tapped into the greatest debate in memoir and autobiography writing: if memories are shaped by mood and experience, and no two people will remember the same event the same way, can we ever write truthfully about our lives and experiences?
There’s a poignancy to Cave’s ramblings, moments of staggering profundity hidden in amongst lyrics and the overarching longing for his wife, at home with the children while he moves constantly between towns. The stories blur and interweave, with Cave’s impressive blend of crassness and intellectualism keeping the stories from veering too far towards comedy or tragedy. Cave has a love of, and mastery over, the language he uses, and that makes for an intellectually compelling journey into the mind of a musical great at his most vulnerable and weary.
Most tour accounts hide this kind of exhaustion from viewers, shielding them from the dark side of the musical industry. The band are constantly moving, constantly performing, and it’s clear that Cave at times struggles to maintain momentum in the face of balancing his musical persona with the realities of a father and husband away from his family.
Though readers can feel Cave’s exhaustion and restlessness within his writing, there’s never a moment where we’re drowning in his emotions, nor where we’re greeted with a ‘woe is me’ type monologue. This isn’t a story about how hard done by Nick Cave is, nor an excuse to pity the life he leads in his quest to create. The creation is the highs, the exhaustion is the low, and throughout ‘The Sick Bag Song’ you can’t help but feel that Cave can’t have one without the other.
If you’re a fan of Nick Cave’s work with The Birthday Party, The Bad Seeds, or Grinderman, then you’re probably going to love a glimpse behind the curtain of Cave’s tour experiences. But this isn’t just a book for fans. If you like stories that touch you, then veer off into randomness before they can get too maudlin, you’re probably going to like it. The same is true for anyone who enjoys experimental forms of storytelling.
‘The Sick Bag Song’ is published by Text Publishing, and is available through the major physical and online booksellers.