book reviews reading steel van man what new in reading by Caroline Russo | on September 15, 2013 | 0 comments | in Book Reviews | Like it 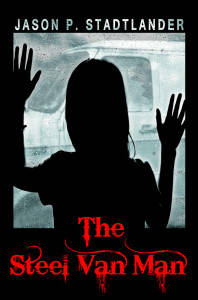 The Hunter is on a mission to rid the world of those that would harm children. He seeks out the most evil perpetrators, elicits a full confession, and then drains them of all their blood.

The latest of The Hunter’s victims has landed in the caseload of Detective Stanley Devonshire. Tasked with finding the murderer, he stumbles onto the track of the serial killer.

In a cat and mouse game, the killer is playing it close to the chest, immersing himself into the investigation in order to get his message across. He will do anything it takes to ensure his victims are brought to justice.

The killer could be anyone but Detective Devonshire could never imagine it would be someone so near.

The Steel Van Man is the first book by author Jason P. Stadtlander. A fast few questions with Jason:

Q: You mention in the opening words that the book was inspired by your father’s reference to the Steel Van Man. What made you decide to write the book?

A: I really wanted to try something different. A lot of my stories have always been sci-fi, historical fiction and drama. I wanted to try something on the thriller end and at the time I couldn’t think of a better thing that sent a chill up my spine like that of the “Steel Van Man” that my father had always used to get us to behave.

Q: Do you personally identify with any of the characters?

A: I would have to say that though I don’t have the killer’s murderous side, I can associate with the hunter in some respects… We all have ghosts in our closet and we all have things that we prefer to keep hidden from others. However, I think Stan was the closest to my personality as I wrote the story.

Q: The opening few chapters are quite startling, what kind of research did you have to do for the book?

A: In developing the characters I talked quite a bit with a local criminal psychologist. But I also had an ex-Navy Seal that helped with some of the military accuracy as well as reading a lot of articles on serial killers, child predators and how their minds worked.

Q: What can we expect in the next book?

A: The next book really dives more into the psychology of why the killer turned out the way that it did. There are several elements of the book that have literally been ripped from the headlines of news and integrated into the book. I think that readers can expect there to be some amazing new revelations as well as some consequences to the killer’s actions that they might have been hoping against.