Book Review: We All Looked Up by Tommy Wallach 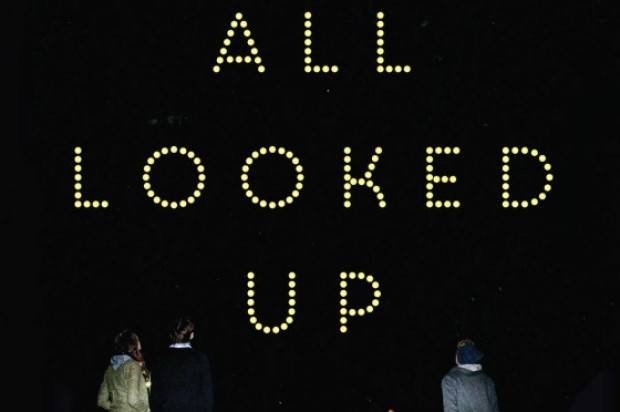 We All Looked Up by Tommy Wallach
Review by Kylie Thompson

Sadly, when many adults think about books aimed at teenagers, they assume they’re either meaningless fluff, or filled with idiotic notions of romance that border on abuse.

What a lot of people miss is that YA fiction is often deeply controversial and thought provoking, willing to explore topics and events mainstream ‘adult’ fiction shies away from or uses for cheap laughs. While its novels might hold smaller word counts than their adult counterparts, YA fiction isn’t generally what you’d call an easy read genre.

Tommy Wallach’s We All Looked Up is a perfect example of the power of YA fiction. Popular culture is rife with stories of the end of the world, of course. They’re often played for laughs, or used to show human courage and resourcefulness winning out over nature. The end of days is a common trope, and yet, we don’t often spend time thinking about the realities of those final days or months. When we do, it’s painted with a stoicism that seems woefully out of place with the realities of modern life.

We All Looked Up is the story of a group of teens facing up to the reality that they may only have two months left to live. The premise is simple: when all of the labels and masks you’ve worn suddenly become meaningless, how do you make something of your life with no real time to do so?

If you’re looking for a book to tell you it’ll all be okay, this isn’t it. This isn’t a Disney Princess™ type of deal, where happiness will inevitably triumph and true love is assured its happily ever after. It’s a story about uncertainties, and the grey areas we don’t often like to acknowledge, let alone explore. The heroes in We All Looked Up aren’t perfect, and the villains are flawed and broken rather than supervillains. As in real life, some characters cope with the looming threat, and some don’t, and yet for the most part it’s hard to think less of them for their struggles. The cast of characters aren’t passive spectators in their lives, at least, not anymore. And while they move constantly closer to each other and their goals, every action is capable of tearing them all apart.

This is the sort of book I could praise from the rooftops: well written, engaging to the point it’s impossible to put down, and containing a wit and wisdom it’s hard not to connect with. The characters aren’t caricatures or stock tropes of what we think they should be, and their flaws and fears make for an engaging ensemble cast.

If there’s one thing that bothers me, it’s that the story itself is dated by some of the references, but that, sadly, seems to be a YA trope of late. The problem with mentioning the name of the President, and using a real President as a character, is that it instantly dates the story being told. It can’t be a story taking place at any time; it has to be happening during a specific era and timeframe.

That’s not a huge problem unless you’re the type of person who tries to nail down a potential timespan for stories, and it’s probably not going to be too big an issue for future readers. It’s the sort of niggling little thing that calls attention when it’s impossible to find larger issues to discuss. And that tells you a lot about the quality of the Wallach’s writing.

If you can’t stand uncertainty in your reading matter, then it’s possibly not the book for you right now. But if you love some moral grey areas, and psychologically driven action and drama, then We All Looked Up needs to be added to your TBR (to be read) pile.

We All Looked Up is published by Simon and Schuster Australia, and is available through the publisher’s website, and at leading booksellers both online and off.