beauty eccentric glamour Lifestyle by Caroline Russo | on January 27, 2016 | 0 comments | in Book Reviews | Like it 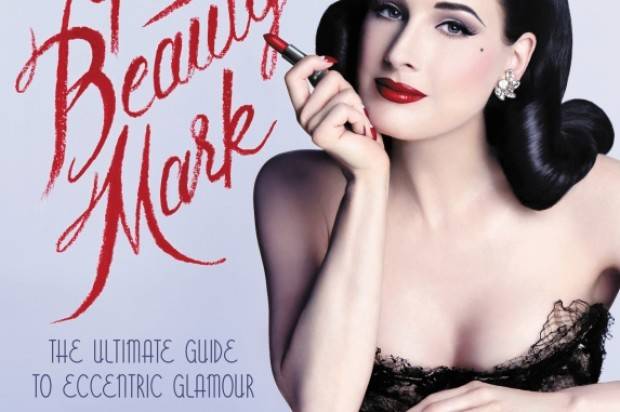 Dita Von Teese, for those who’ve yet to encounter her, is a raven-haired bombshell with a love of retro glamour and a reputation for bringing burlesque back into fashion. Her style is old world; the golden age of Hollywood’s screen sirens brought back to life in the modern age of ever-changing trends and instant gratification. Whether you love her, or feel deeply uncomfortable to behold her, it’s increasingly clear that Dita Von Teese is a modern style icon.

It’s not unusual for celebrities to write health and lifestyle books, telling readers how they got that summer glow or toned butt. But because Von Teese almost always does her own hair and makeup, Your Beauty Mark has the sort of credibility that a majority of celebrity make-over books lack. This isn’t Von Teese and Apodaca simply parroting back what they’ve been told by stylists: this is a pair of women who know their subject matter, cutting easily through the layers of differing opinions, and getting to the heart of their preferred style.

Your Beauty Mark: The Ultimate Guide to Eccentric Glamour isn’t Von Teese’s first foray into publishing. This is her third book, but the first to move away from a strictly Burlesque focus. Instead, Von Teese has turned her attention towards a conversation about how anyone can create their own signature style, and find ways to turn their ‘flaws’ into adored elements of that style.

The language used is a little more flowery than you may expect, but completely in line with Von Teese’s old-world, larger than life persona. It adds another layer of theatre to what could easily be a dry subject matter. Your Beauty Mark reads like a hushed conversation between friends, a ritual awakening to the theatricality of the world instead of a simple how-to guide.

And that’s the point. Your Beauty Mark isn’t a quick and dirty guide to throwing on makeup and rushing out the door. To Von Teese, beauty is a lifestyle choice, an act of personal theatre that takes time to create and maintain. In a sense, it’s meditation for those who can think of nothing more dull than focusing on breathing.

As such, Your Beauty Mark isn’t just a book about makeup, but a conversation about lifestyle and caring for your body, not through denial and shaming, but through celebrating your unique attributes in ways that bring you joy.

What I love about Your Beauty Mark is Von Teese’s insistence that it’s not about changing fashions and blindly following trends. It’s about finding the look that you love yourself in, and running with it. The figures that most inspire her are often considered eccentric for their cheerful abandonment of their era’s ideas of what women should be. Eccentric glamour, an ideal Von Teese is clearly passionate about, isn’t about looking like everyone else. It’s about looking like the best version of yourself, and finding what makes you feel confident and
beautiful.

It’s great to see that an argument is made that all women and men are beautiful in their own unique way. Von Teese is a proponent of ignoring the traditional, narrow idea of beauty and finding ways to feel beautiful as you are. I love that the models aren’t always the traditional beautiful people you’d expect, that they’re individuals who have taken their personal ‘flaws’ and made them an integral part of their personal style. Having said that, the idea could have been taken further, and proved more fully. I’d love to see a wider variety of ethnicities, body shapes, and sizes showcasing that eccentric glamour truly is for everyone.

Though it’s a source of personal frustration throughout the lifestyle guide industry, it’s not enough to ruin the reading, nor to detract from the collection of images on display. Unsurprisingly, the photography is staggeringly beautiful, with Von Teese and the other models looking perpetually stunning. And there’s something to be said for Von Teese stripped of her trademark make up, settled into her boudoir (or at least, the studio equivalent of it) and step by step creating her public persona.

If there’s a drawback to Your Beauty Mark, it’s that Von Teese and Apodaca fall prey to that tedious beauty manual trope of assuring readers that Von Teese is just as humble and plain as everyone else. Apparently, she’s just another ordinary girl who just so happens to look spectacular when styled a certain way.

Without the clothes and makeup, with her natural hair colour, Von Teese isn’t what normal people call ‘plain’. A more natural version of beautiful, certainly, but ‘plain’ wouldn’t make the list of descriptors.

Overall though, Your Beauty Mark is an engaging guide to trying the golden era, retro glam style that Von Teese has perfected over the years. It’s also a wonderful conversation about changing the cultural idea of beauty to mean more than some kind of perfection.

Your Beauty Mark is published in Australia through Harper Collins, and is available through the publisher’s website, and through the major physical and online bookstores.