cooking tips for love menue reading pick whats new in books by Caroline Russo | on April 10, 2017 | 0 comments | in Book Reviews | Like it 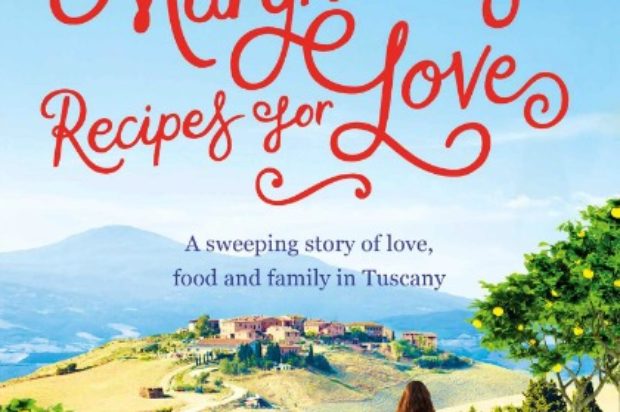 Margherita had a dream, but somewhere along the way, that dream got pushed aside. Probably right around the time she married Francesco. But with her marriage in tatters, and her heart demanding more than settling for a life she hates, Margherita knows it’s time to go home.

Roccafitta, Tuscany, is paradise to a wounded soul: a world of fresh foods, and local characters who know and care about each other. Here, she can give her heart time to heal, and her dream of opening her own restaurant might even become re-opening the one her mother ran, if only she can find the money to make it happen.
Her best friend might just be able to help: one of his wealthier clients is looking for a chef to wow potential business partners, and Margherita would easily fit the bill. At least she would if she were a trained chef. And if she hadn’t already met, and instantly disliked, her new boss. And if the feeling hadn’t been entirely, utterly mutual.
Then again, she’s hardly the only person in town wary of Nicola Revelli.

Nicola is the newest shark in local waters; buying up the vineyards with plans to turn them from artisan delicacies into production houses for cheap, inferior wine to export. A little schmoozing, a little food and wine to win over the land owners, and he’ll be incredibly rich. And if that means paying Margherita to prepare meals, well, it’s a sacrifice he’ll just have to make. But as the heat in the kitchen grows, so too does their mutual attraction. Sooner or later, they’ll both have to learn whether food can win- or heal- a heart.
‘Margherita’s Recipes For Love’ is the sort of gentle romance read perfect for snuggling under a blanket with. It’s sweet without being cloying, with a fairy tale-like magic that’s a lot of fun to spend an afternoon with. If you like your romance heavy-handed with the angst, or of a more carnal flavour, this might not be your ideal read. But if you enjoy a bit of cheesy romance now and then, then Margherita’s story might just be a must-read.

There are moments where there may be just a hint too much cheese to this story, and moments where the constant food imagery might lose its charm. But it’s hard not to love Roccafitta and it’s quirky inhabitants, even if it’s hardly a realistic kind of a read.

This is one of those novels with a bonus for readers: the foods Margherita prepares in the story are included as recipes for those who want to try their hand at some culinary romancing. Given how delectable the dishes sound within the story, I have the sneaking suspicion those recipes will prove incredibly popular with readers.
‘Margherita’s Recipes For Love’ is published by Simon and Schuster, and is available at leading retailers nationwide.