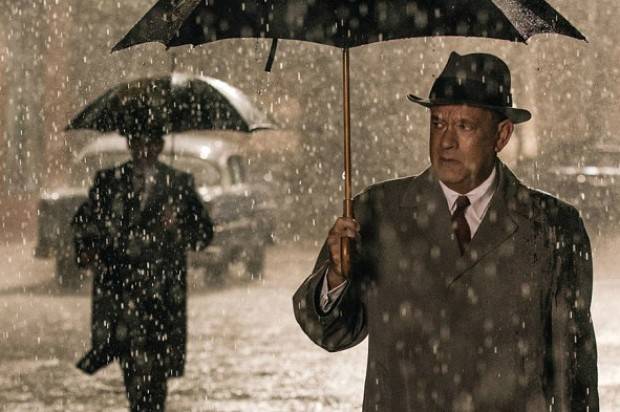 It’s unsurprising that ‘Bridge of Spies’ is a particularly classy film given that it reunites Steven Spielberg and Tom Hanks, not to mention screenwriting credits from Joel and Ethan Coen, and delivers a wonderful sense of slow building tension without resorting to unnecessary set pieces seeped in outlandish action. Based on true events set within the height of the cold war, this polished espionage thriller is a welcome reminder of the effect simplistic filmmaking can have.

Essentially a three-story affair involving a Soviet spy, an American pilot, and an American economics student, all of whom are intricately woven into an arc overseen by US insurance lawyer James Donovan (Hanks) who is recruited by the CIA to negotiate a swap of Russian spy Rudolph Abel (Mark Rylance) for a US pilot (Austin Stowell) captured and jailed by the Soviet Union when his plane was shot down. It’s a thoroughly engrossing tale, and one that you best pay attention to, with Spielberg littering every frame with a sense of creative intelligence. The creations of Donovan and Abel are what truly bring ‘Bridge of Spies’ alive as their shared characteristic of integrity binds them despite their differing personalities; the duo share some beautifully understated moments together which ultimately receives the most touching of pay-offs.

Though the film could have easily survived on the emotional bond set between the men, the choice to switch the narrative to Donovan’s recruitment by the CIA to negotiate a prisoner swap is what stirs to the plot to test the morality of its men. Incarcerated pilot Francis Gary Powers (Stowell) and student Fredric Pryor (Will Rogers), obtained when he illegally entered East Berlin as the infamous wall was being built, are being offered by the officials back to their homeland in a trade for Abel, an exchange Donovan is in charge of with altering points of importance from all parties involved. It’s a plot point ripe with skilfully executed tension, and though it would be easy to criticise the film for underplaying these moments – much of the running time is spent in various locations with respective characters engaging in conversations – the lack of spectacle isn’t felt as everything put forward on screen is so captivatingly immaculate.

If there’s one criticism to make it’s that the female characters involved are little more than just window dressing, with the delightful Amy Ryan criminally underused as Donovan’s wife. Outside of that ‘Bridge of Spies’, with its emphatic score, crisp set design, and welcome sense of humour (a cat-and-mouse type sequence in the pouring rain is played with a light whimsy), is a beautiful piece of cinema exploring the nature of humanity through the prism of war and how good will ultimately triumph over evil.