Bring Me The Horizon Soundwave That's The Spirit by Caroline Russo | on September 12, 2015 | 0 comments | in Music | Like it 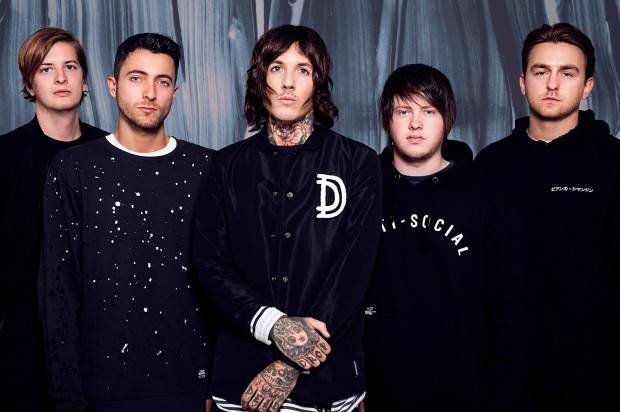 BRING ME THE HORIZON has today released their new studio album THAT’S THE SPIRIT through Sony Music Entertainment Australia, which has already rocketed to the #1 position on the iTunes Album Chart. Furthermore, the band has announced that they will return to Australia early next year to exclusively perform at Soundwave Festival. Head to www.soundwavefestival.com for full details and further line-up announcements and check out the THAT’S THE SPIRIT Soundwave 2016 trailer: http://smarturl.it/BMTH.TTS.trailer

THAT’S THE SPIRIT is an album that will catapult them even further into the stratosphere and confirm their status as one of the most important British rock bands in the world. It is an eleven track-exhilarating ride of an album, bursting with huge riffs, soaring vocals and stadium filling monster tracks. It was recorded in Santorini Greece at Black Rock Studios, mixed in London, mastered in New York and produced by the band’s own Oli Sykes and Jordan Fish.

Bring Me The Horizon have had a whirlwind two years, which has seen them play sell out shows around the world including Wembley Arena, score an ARIA number one and UK Top 3 album, dominate Triple J and Radio 1’s playlists and sell over 2 million albums worldwide to date. They have successfully transcended the world of metal into the world of music that appeals to the masses, without losing an ounce of credibility or compromising their sound. 2013 saw Bring Me The Horizon release the globally successful SEMPITERNAL, which not only debuted at number one in Australia but also quickly achieved Gold accreditation, the band’s first in their career. The album triggered a year of triumphs for the young band from Sheffield and has sold over half a million copies worldwide to date. It firmly put them on the map and proved that a metal band can make their mark on the mainstream. Their ARIA number one debut for SEMPITERNAL was the band’s second in Australia following on from their third album, THERE IS A HELL, BELIEVE ME I’VE SEEN IT. THERE IS A HEAVEN, LET’S KEEP IT A SECRET, which also took out the top spot in 2010.

Bring Me Horizon brought 2014 to a close on a huge high with a sold out show at Wembley Arena and a hit single with a brand new track, ‘Drown’. The #1 ARIA DVD of their incredible performance at Wembley Arena, titled Bring Me The Horizon: Live At Wembley, is available now.