Swagamama are breaking all the stereotypes of a typical dance crew.

The six friends, all from different dance, music and visual arts backgrounds are taking the TV world by storm, wowing the judges of Channel 9’s Australia’s Got Talent and competing this Sunday for a place in the Grand Final.

Immediately recognisable from their habit of wearing individually coloured masks, the Brisbane boys came together with an idea to form an unusual dance crew based around imagination and crowd-pleasing illusions and acrobatics.

They quickly found success, winning competitions against the top dance acts from around Australia and New Zealand, before emerging on Australia’s Got Talent 2013 as the opening act of the season, receiving a standing ovation.

“There shouldn’t be any rules when it comes to expressing your individuality and imagination” said Bryce Jarrett, the red masked member of the crew. “We try not to be constrained by any style or stereotype, the most important thing for us was to be authentic and do what we love”.

Surprisingly, some of the boys have full time jobs and dedicate their evenings and weekends to dance, often late into the night. “We just dance together all the time, so it seemed right to perform together” said orange-masked member Mark Barber. “Our dream is to be able to do this for a living” said Barber, “you always get told it’s so hard to follow a passion and make it your livelihood, but all the amazing feedback since the show makes us believe…what if we actually can?”

Behind their success is an unusual variety of skills. Red Bull 2012 Australian Breakdance Champion Jacob Goodridge is joined by animation specialists Chris Vitnell and Bryce Jarrett.  Popping and locking dancer Sheru Bharadwaja, acrobatics and flipping expert Barber, and musician and sound designer Paul Tindle round out the crew.

Despite being a relatively newly formed act, Swagamama have been gaining attention because of their use of musical comedy and spectacular tricks in combination with high level dance skills. “We feel very blessed by the response to our shows” said pink-masked member Tindle. “We’re learning so much each time and never expected support like this. It’s a privilege and we want to make sure we do our best every time we take the stage, we owe it to the audience for their belief in us”.

Swagamama will be appearing on Australia’s Got Talent 2013, Final 1 at 6:30pm this Sunday on Channel 9.

They are also one of the main entertainment guests for Hush Hush Biz Party SEPTEMBER 25TH 633 ANNE ST VALLEY Next to Cloudland.  For info on this and to secure a invite email in[email protected] and we will be giving away some tickets for the night to come celebrate our new look and dance the night away with all our wonderful guests. 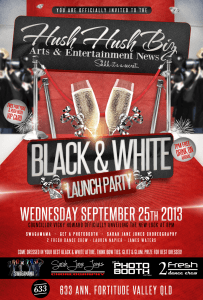