Brisbane Goes Nuts for The Nutcracker. 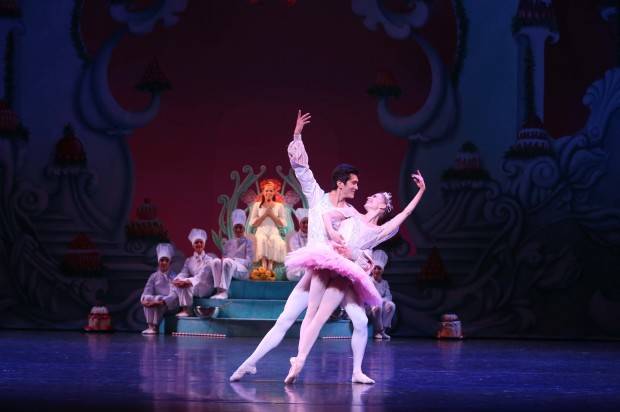 On Centre Stage.
Brisbane Goes Nuts for The Nutcracker.
By Douglas Kennedy.

The Queensland Ballet’s (QB) sell-out production of Pyotr Ilyich Tchaikovsky’s The Nutcracker is spear-heading a Brisbane campaign to capitalise on Christmas traditions this year and into the future.
The Queensland capital is going nuts for the 19th century masterpiece as the QB’s celebrated artistic director, Li Cunxin, has pledged that master choreographer Ben Stevenson’s contemporary interpretation of the work will be staged annually for at least the next four years.
The Chinese born Li, who is universally known as Mao’s Last Dancer thanks to his autobiography adapted for the big screen in 2009, fell in love with the piece when he danced in it for Stevenson at the Houston Ballet in 1979.
Li, who make internationally headlines when he defected while in Houston, came to the QB last year (2013) and was recently named Queensland’s Australian of the Year.
The Nutcracker, which will be at the Playhouse Theatre for 17 sell-out performances this festive season, is one of the great traditional festival works with seasons around the world, including one in Houston.
Although with Christmas carols, cards, Santa Claus, Christmas trees and pantomimes The Nutcracker has grown in importance through the 20th century, despite a bumpy start.
The work, which tells the story of Clara’s journey into a magical world with place names such as Land of the Snow and the Kingdom of Sweets and characters such as the Sugar Plum Fairy and, of course, the Nutcracker Prince was adapted by Tchaikovsky from ETA Hoffmann’s 1816 story The Nutcracker and The Mouse King.
The work premiered on December 18, 1892, at the Maryinsky Theatre in St Petersburg, but the story was not well received at first.
Tchaikovsky’s popular score, however, saved the day and the dance production grew in stature with Stevenson’s 1976 production for the Houston Ballet becoming one of the most popular versions.

Today The Nutcracker is performed throughout the US at Christmas time and is a well-established feature of the Houston program.
Now Li hopes to create a similar tradition in Brisbane as the show coincides with the rediscovered city Christmas Parade and Pantomime each night until December 22.
The Nutcracker procession will move nightly from the QPAC stage with more than 200 performers lead by the QB’s Clara.
The role is played by four children with Teri Crilly as the principal but the nightly 6.30pm parade will also feature 3, 4 and 5 metre 3D floating Christmas decorations.
Other ‘Nutcracker Events’ will include QB’s first outdoor screening of the production at South Bank as part of the Bright Star Christmas program on Saturday (December 21) and other supporting programs.
The Nutcracker, which is an iconic European tool for cracking nuts often featuring a character model, has been around from at least the 14th century.
According to historian Robert Mills, who penned a book on the subject, Nutcrackers, the implement was mentioned in The Canterbury Tales and even King Henry VIII gave a pair of nutcrackers to Anne Boleyn.
The traditional wooden variety – crafted by toymakers – is mostly associated with Germany, although in some parts of Britain Halloween was known as Nutcrack night.
Both the ballet and the nutcracker gained broader international acceptance when the production became popular in the US and GIs stationed in Germany after World War Two started sending nutcrackers home as Christmas gift.
Today there’s even the Leavenworth Nutcracker Museum in Washington State, which boasts more than 4000 figurines.
Now Brisbane Lord Major Graham Quirk and QB Ad Li Cunxin is hoping that the Nutcracker and assorted related events could be a shot in the arm for Brisbane’s Christmas tourism program.
When Cr Quirk recently launched the revised Christmas program he said last year’s events attracted somewhere in access 150,000 extra people into the city and generated an extra $2.9 million a day for the CBD economy.
This year’s attractions – which also includes a 3D animated projection show onto the City Hall – is tipped to bring even more people into Brisbane.