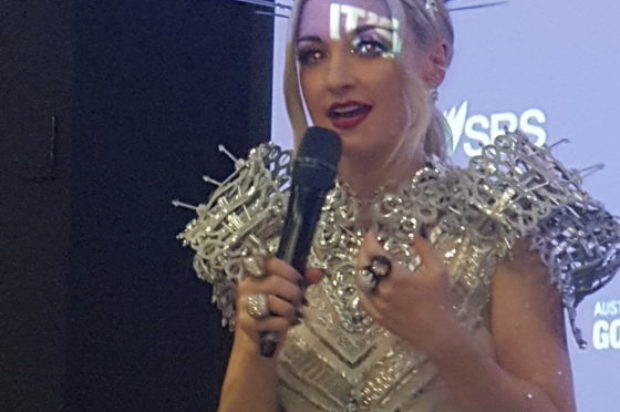 RUN DOWN ON THE NIGHT FOR ERUOVISION.

Eurovision Australia Decides showed the very best of Australian talent in an all inclusive way that has rarely been seen in this country.
It showcased true talent from acts from different backgrounds, genders and of differing public recognition.
In fact, some of the acts I had never heard of before attending the event were the true standouts.
An example of this was 16 year old Leena Nanos who had incredible singing talent and stage presence for a performer her age.
She also showed through her song ‘Set Me Free’ that she has remarkable writing talent for her age as the lyrics strongly showed true emotion and experience of love and loss.

Ella Hooper opened up the night though with the rock tune ‘Data Dust’. As the genre suggests, she absolutely rocked it both vocally and in terms of performance.
Ella showed off not only her singing ability but also her dance ability.
Another achievement of Ella’s performance was her balance of interacting with the audience and with the cameras feeding the experience to those watching back home.

Another stand out of the night was Kate Miller-Heidke who has been a truly under appreciated talent for many years now.
She showed her usual brilliant singing and vocal range whist also showing off and incredible stage presence.
Her song ‘Zero Gravity’ was incredibly powerful both from Miller-Heidke’s singing and the lyrics.
Personally, I have enjoyed Miller-Heidke’s music for roughly the last 10 years and this was the first time I’d seen her live and she did not disappoint.

Ayden gave a heartfelt performance. He is an artist that is incredibly charming and could easily fall back into a stereotype that other artist have before (based on style).
Instead he presents a heartfelt song and uses it to connect to the audience and leave an impact on the competition.

It would be impossible to talk about the lineup of the night without mentioning both Electric Fields.
Firstly, Electric Fields had and energetic song, ‘2000 and Whatever’ that added diversity to the competition and was impossible not to dance along to.
Electric Fields built a brilliant atmosphere with their performance that lit up the stage and set the tone for the night early on.

Similarly Courtney Act had a strong energy and remarkable stage presence.
She took full advantage of what could be achieved with the performance using some of the best set pieces of the night.
In terms of the song, ‘Fight for Love’ was an upbeat song with a brilliant message about following your heart no matter the cost.
The combination of the stage presence and the song itself was a brilliant once in a lifetime performance.

Indie pop band Sheppard showed off their incredible talent once again.
The bad hit peek popularity in 2014 with their hit ‘Geronimo’.
Similar to that song, ‘On My Way’ is an upbeat adventure anthem mixed with a brilliant love song.
Sheppard did not use many props (if any) during the course of their performance but they did not need to as their energy
and audience interaction made up for it and made this one of the more memorable performances of the night.

Alfie Arcuri sings a beautifully heartfelt ballad titled ‘To Myself’. He sings it with an incredible amount of heart.
His emotions physically come through in his performance. In his intro video he claims he can only sing songs he has a connection with and that becomes obvious with his performance.
His writing is brilliantly expressive and only he could perform it to its full potential.

Tania Doko starts her performance slowly. It comes off very serious, especially with the serious seeming dancers.
After that, the song picks up pace and becomes an upbeat song that could be enjoyed by anyone.
‘Piece of Me’ has some personal lyrics and is a brilliant song but the song and performance do not match.

Kate Miller Heidke won the competition represent Australia at Eurovision in Tel Aviv in May.
It was hard to guess as all of the performances are truly remarkable. This event has truly shown off the best talent this country has to offer. Tonight she does it again and what a visual fest and pitch song that raised the bar on her carer once more.

The night also featured performances by Casey Donovan and Dami Im who remind us why they are musical treasures of this country.
The two performances were of completely different genres but both compliment the lively atmosphere created by the competing performances.