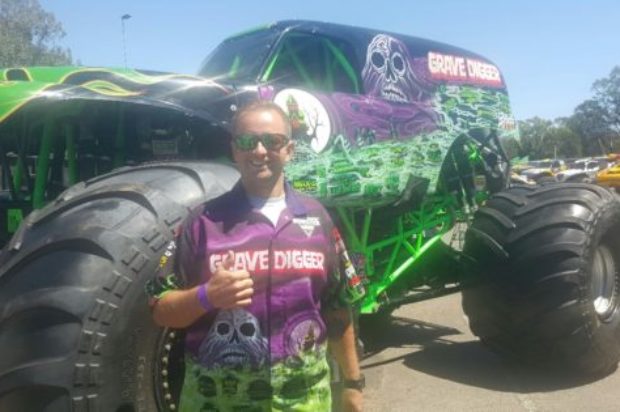 Making their Australian debut in Brisbane on Saturday October 7,
in a blaze of supercharged excitement …..

Four custom-designed, supercharged Monster Jam Trucks will make their Australian debut in Brisbane on Saturday October 8 when the national tour of Monster Jam 2017 roars into action!

Brisbane will launch the Australian Monster Jam 2017 tour at a new family-friendly show time – 6pm on Saturday October 7; with the famous Party in the Pits® running from 1pm where fans can get up close with their favourite Monster Jam trucks, before meeting the superstar drivers, taking pictures, getting autographs & more! Standing nearly four metres tall and four metres wide, Monster Jam trucks are custom-designed machines that weigh around 5,500kgs. Built for short, high powered bursts of speed, the powerful Monster Jam beasts perform breathtaking stunts and can accelerate from 0-100kph in under 3 seconds. They literally fly – covering up to 50m in a single leap (a distance greater than 14 cars side by side) and up to 12m skywards.

The show will feature super-charged Monster Jam driver competitions – including Monster Jam Racing and the coveted Freestyle competitions. AND, for the very first time, Australia will witness the ultimate showdown where motorsport royalty go head-to-head in a unique Race Of Champions competition on the Monster Jam dirt track to determine who really is the fastest of them all. Racers include the Queensland superstar himself, Mick Doohan, going head-to-head with motorbike stunt rider and daredevil extraordinaire Robbie Maddison, and former British rally champion Alister McRae.

· Lurking in the deep and ready to make a splash for its first sighting in comes the giant shark MegalodonTM. This menacing beast is one of the newest additions to Monster Jam and a crowd favourite. Featuring foam fins to create life-like shark movements, this beast from the ocean is stealth-like and dangerous! Driving this massive grey beast is Alex Blackwell, also in his Australian debut.

· Rolling in the deep, and into Brisbane for the first time is Blue Thunder®, well known and feared/loved on the American Monster Jam tour, he is designed like a classic pickup truck and will be driven by Chad Fortune, a former American football tight-end and professional wrestler!