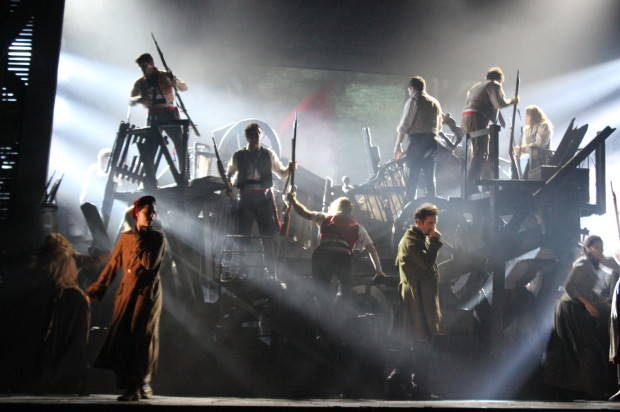  WINNER OF 5 HELPMANN AWARDS INCLUDING BEST MUSICAL THE MUSICAL PHENOMENON HAS ARRIVED IN BRISBANE
Cameron Mackintosh’s acclaimed new production of Boublil & Schönberg’s legendary musical, LES MISÉRABLES, which has already celebrated triumphant seasons in Melbourne, Perth and Sydney has opened in Brisbane at QPAC’s Lyric Theatre. The production scooped the pool at the 2015 Helpmann Awards winning in 5 categories including Best Musical, Best Male Actor in a Musical, Best Female Actor in a Supporting Role in a Musical, Best Lighting Design and Best Sound Design.
One of the world’s greatest musicals, this new production of the much-loved blockbuster features glorious modernised staging, orchestrations and dazzlingly reimagined scenery inspired by the paintings of Victor Hugo. This new version of LES MISERABLES is not to be missed. You might think you know the show – but you’ve never seen it like this!
Cameron Mackintosh has assembled an extremely talented cast for this brand new production of LES MISÉRABLES. Hailed by The Australian as ‘an ensemble of star quality’, the cast has earned heartfelt adoration for their spine tingling and flawless performances. The original Australian production of LES MISÉRABLES saw Cameron Mackintosh launch the careers of some of Australia’s biggest stars, including Marina Prior and Anthony Warlow. For this newest production, he has once again assembled a cast poised to follow the same path.

Simon Gleeson’s portrayal of the iconic Jean Valjean is heartrending, joining the greats who have played the role before him and his portrayal has won him the prestigious Helpmann Award for Best Male Actor in a Musical. Garnering high critical praise such as ’the heart and soul of this return season is the heaven-sent performance of Simon Gleeson’, also having won Theatre People’s Pro Choice Award for ‘Best Actor in a Musical’. Simon came to the role as a highly respected actor and musical theatre star, having worked extensively in theatre, film and television in Australia and the UK, including performing in London’s prestigious West End. Simon has been nominated for two Helpmann Awards for Mamma Mia! and Love Never Dies, a Sydney Theatre Award for Love Never Dies and a Green Room Award for Chess. 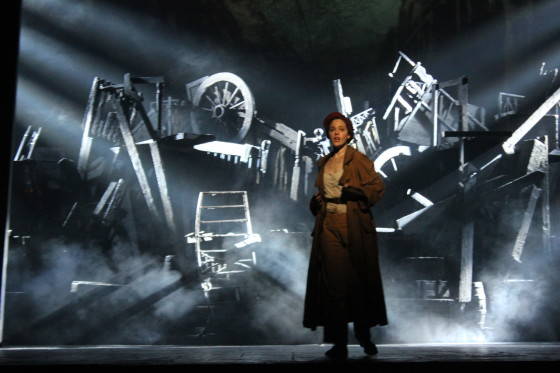 Hayden Tee firmly stakes his claim on Valjean’s lifelong antagonist Javert, with Time Out citing his rendition of “Stars” as ‘a show highlight’ as well as earning him a Theatre People Pro Choice Award for ‘Best Individual Performance’. NIDA-trained Hayden has appeared in many musical theatre and opera productions around the world, including Being Earnest, My Fair Lady and in 2005 he played Marius in the 20th anniversary West End production of LES MISÉRABLES. He has also just been honoured with a Green Room Award for his portrayal of Javert in this production.
Patrice Tipoki stars as Fantine, with her rendition of the show’s much loved “I Dreamed A Dream” described as ‘one of unwavering emotion’. Known to Australian audiences from lead roles in The Lion King and Wicked, Patrice’s angelic portrayal of Fantine is a role she was born to play.
Lara Mulcahy has proven a triumph as the hilariously grotesque Madame Thénardier. Lara is known for countless stage, TV and film productions, including the Baz Luhrmann films, Strictly Ballroom, Moulin Rouge and The Great Gatsby and her award-winning performance in Mamma Mia! Playing Lara’s villainous other half Monsieur Thénardier
is Australian theatre and cabaret favourite, Trevor Ashley. Trevor has appeared in Priscilla, Queen of the Desert: The Musical, Hairspray: The Musical and Jerry Springer: The Opera as well as having an extensive career co-writing and starring in his own stage productions. Lara and Trevor make an almighty impact as the Thénardiers, with “Master of the House” delivering the thrill audiences have come to expect from this showstopper.
WAAPA graduate Kerrie Anne Greenland plays Eponine, soaring in her song “On my Own”, in this her first professional role. With a voice so sublime, Kerrie Anne has been hailed a ‘superstar in the making’ and has been awarded the Helpmann Award for Best Female Actor in a Supporting Role in a Musical for her portrayal. Fellow WAAPA graduate Emily Langridge plays the beloved Cosette with an endearing sweetness and innocence. Emily has previously been seen in The Production Company’s Gypsy and Pirates of Penzance.
Chris Durling commands the stage in the pivotal role of Enjolras, the passionate student leader of the revolution. Chris has performed in the Australian and New Zealand productions of Jersey Boys and Grease, as well other productions including Fame, High School Musical, Damn Yankees and My Fair Lady. The love-struck revolutionary Marius is Helpmann Award-nominated performer Euan Doidge, described as ‘bringing a gentle naivety to the boys of the barricade’. At just 21 years old, Euan has already performed in major musicals including Legally Blonde, A Chorus Line and Grease.
Twenty-four of Australia’s finest talents join the LES MISÉRABLES ensemble, with the child roles of Little Cosette, Young Eponine, and Gavroche being shared by 12 talented children making their professional debut in this spectacular production.
This new production of LES MISÉRABLES has been praised by critics, fans and new audiences, breaking box office records internationally and inspiring filmmakers to make the outstandingly successful movie which went on to win 3 Oscar’s®, 3 Golden Globes® and 4 BAFTAs.
Set against the backdrop of 19th-century revolutionary France, LES MISÉRABLES is the world’s longest running musical and has been seen by more than 70 million people worldwide in 42 countries and in 22 languages, LES MISÉRABLES is undisputedly one of the most popular musicals of all time. Having won more than 125 major awards around the world it has been hailed as the most stirring, moving musical ever. Based on Victor Hugo’s classic novel, it is an epic and uplifting story about the survival of the human spirit. The magnificent score of LES MISÉRABLES includes the classic songs “I Dreamed a Dream”, “On My Own”, “Stars”, “Bring Him Home”, “Do You Hear the People Sing?”, “One Day More”, “Empty Chairs at Empty Tables”, “Master of the House” and many more.
Cameron Mackintosh’s production of LES MISÉRABLES is written by Alain Boublil and Claude-Michel Schönberg and is based on the novel by Victor Hugo. It has music by Claude-Michel Schönberg, lyrics by Herbert Kretzmer and original French text by Alain Boublil and Jean-Marc Natel. Adapted by Trevor Nunn and John Caird, it has additional material by James Fenton. This production is directed by Laurence Connor and James Powell and designed by Matt Kinley. Original costumes are by Andreane Neofitou, additional costumes by Christine Rowland, lighting design by Paule Constable and sound design by Mick Potter. Executive Producer of the Australian production is Michael Cassel.