It’s Sunday and the Brisbane Powerhouse is in the grip of festival fever as it seems art lovers are crawling over the industrial monument like so many ants.

This joint is jumpin’ as everyone gets into the groove, all craning their necks to read the bill of fare high up on a brick stack in the centre of the foyer.

The Powerhouse is in the middle of the World Theatre Festival (WTF), but there’s more to come with the Brisbane Comedy Festival next.

This remarkable salute to Brisbane’s great technical heritage was once the hub of the council-operated power station, comprising a boiler house, switch house and turbine room.

It drove the trams which carried the people back and forward across the city, but the winds of change came with the passing of time.

The trams began to disappear in the late 1960s, and finally vanished in April 1969, which left the powerhouse nothing more than a miserable empty relic.

The stately reminder of a grand industrial history was finally decommissioned in 1971 and as a disused work site went through several incarnations in the ensuing years.

It was at different times a works depot, chemical store, a firing range for the military, a shelter for the homeless, a backdrop for underground film makers and party central for street kids.

Then in the 1990s the decision was made to create an all-purpose arts centre – The Brisbane Powerhouse – retaining much of the original architecture and artifacts such as a gantry crane and switch from its power station days and even graffiti from the wilderness years.

The refurbished building opened in May 2000 – blending the past and the present – but Brisbane Powerhouse director Andrew Ross has always maintained that content should rule.

What good is a great building without great content?

Thus we have the WTF which brings together seven major productions from Malaysia, Iran, Germany, America, Britain, Ireland Belgium and, naturally Australia.

The plays – and various musical asides, workshops, master classes, gab fests and ideas marts – will be showcased in a multitude of performances spaces including the 536-Powerhouse Theatre, the 200-seat Visy Theatre, Turbine Hall, outside plaza, green spaces, rooftop terrace plus bars and restaurants.

The Brisbane Powerhouse is now like a bustling bazaar dedicated to arts and entertainments and there’s still the Brisbane Comedy Festival to come featuring more than 35 acts.

The WTF runs to February 26 and The Brisbane Comedy Festival from February 2—March 24. 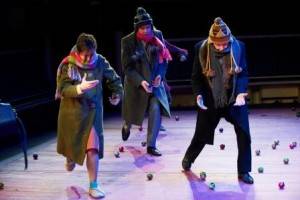 The Play’s the Thing

So what plays were presented at the Brisbane Powerhouse’s World Theatre Festival this year?

The WTF, which has been on the Powerhouse menu since 2010 and was funded until this year, has a far reaching mandate with the emphasis on diversity and edginess.

This is definitely a smorgasbord of arts and entertainment where patrons need to be prepared to take a risk (and beware it doesn’t always work for everyone). 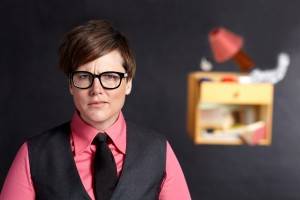 On Centre Stage (OCS) only had the time to take a couple of chances this year with two productions, which have sadly moved on.

The first was Ireland’s Pan Pan Theatre, which gave us a reinvigorated and incredible inventive new production of the Ibsen classic, A Doll House.

This is the story of illusions shattered as a young wife – who seems to be so full of living – begins to realise that her marriage is a stifling fake.

Nora lives for her husband’s pleasure and while he’s not actually cruel his attitude toward her recreates all those ‘taken for granted’ attitudes, which have so often dogged womens’ lives within marriage.

A Doll House was presented in the Powerhouse Theatre, while MKA’s production of The Economist unraveled at the top of the building in The Rooftop Terrace.

This Melbourne company gave us an uneasy story of madness as it took for its theme a response to the massacre on Utoya Island, Norway, in 2011 when 80 people, mostly children, were killed.

The writer, Tobias Manderson-Galvin and director/dramaturgy Van Badham, took as a starting point the journal of mass murderer Anders Breivik.

The subject is gross, the content disturbing and what’s described as, ‘a snapshot into the human psyche at its worst,’ a harrowing account of distorted logic.

The Economist, like many festival works, ran shorter than the usual playtime for only 60 minutes.

For those who like the entertainment to be more predictable the Brisbane Comedy Festival is just around the corner with familiar names such as Josh Thomas, Hannah Gadsby, Stephen K. Amos, Mel Buttle, Tom Ballard, Paul Brasch, Danny Bhoy and Britain’s Sarah Millican among others.

And the really good news?

Both will return next year.