brisbane what one literary festivals music writers rock and roll by Caroline Russo | on March 17, 2017 | 0 comments | in Entertainment | Like it We have a lot of great music and literary festivals in Queensland, and Brisbane is certainly making a name for itself in terms of hosting dynamic, engaging events that go beyond the glitz and glamour to explore the reality of life in the creative industries.

Last year, Brisbane played host to its first ‘A Rock & Roll Writers Festival’, a glimpse behind the curtain at life as a writer or musician, certainly, but also a chance to lay bare the hearts and souls of local, national, and international creatives. Founders Leanne de Souza and Joe Wooley wanted more than your average festival. They wanted to open the floor, and perhaps the floodgates, to an open dialogue about the more difficult issues in the creative industries in a way that was helpful to creatives, but also to those interested but not a part of the creative industries. 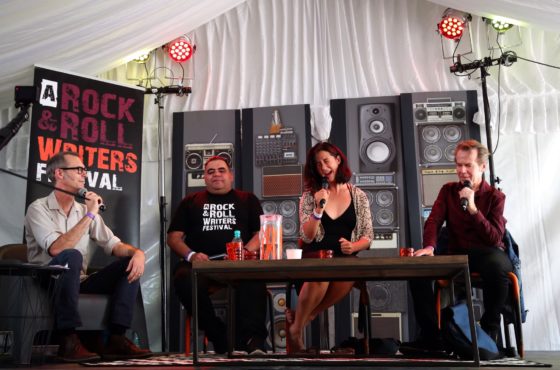 In the two days of the first ever ‘A Rock & Roll Writers Festival’, audiences were offered a staggering array of conversations, many of which are often seen as taboo, or too difficult to host publicly. There were rousing debates about who had the right to Indigenous art and music, honest dialogues about the role and mythology of drug use in showbiz, and the way mental illness seems to be mythologised as a prerequisite to creative expression. In amongst the serious and the psychological were the conversations around reviewing, and the chance to hear stories not just from the golden era reviewers, but from a score of artists with a back catalogue of hilarious hijinks.

This year, the name-dropping is rather epic. Even just naming a few, there’s former ‘You Am I’ front man Tim Rogers, Editor in Chief of the AU Review Sosefina Fuamoli, beloved Brissy boy and iconic writer Nick Earls, upcoming queen of soul music in Australia Ngaiire, legendary music photog Tony Mott, front man of ‘The Medics’ and solo musician/storyteller Kahl Wallis, and (I’m a little thrilled to say this) all-round rock goddess and front woman of ‘Magic Dirt’, Adalita, will all be on hand to guide festival goers through the myth, the magic, and the mayhem of life as a creative.

‘A Rock & Roll Writers Festival’ kicks off at the Old Museum Building in Bowen Hills on April 1. Tickets- either one day or weekend passes- are available through http://oldmuseum.org/?p=4457 The festival has proven to be a hit, and even with a bigger venue there’s a good chance tickets will sell out quickly, so get in fast!