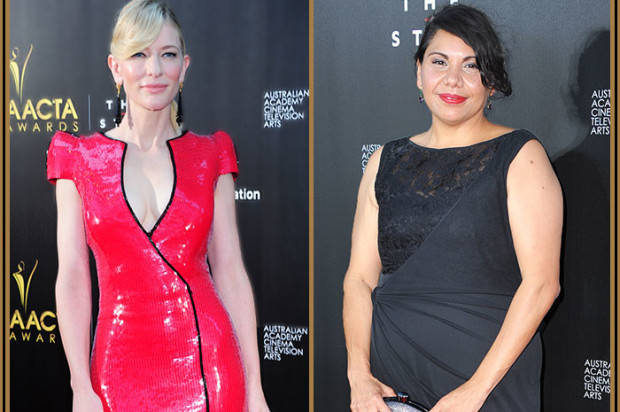 Australian Academy announces Cate Blanchett and Deborah Mailman as hosts of the 4th AACTA Awards Ceremony
The Australian Academy of Cinema and Television Arts (AACTA) today announced Cate Blanchett and Deborah Mailman as the hosts of the 4th AACTA Awards Ceremony, which will be held in Sydney at The Star Event Centre and broadcast on Network Ten on Thursday 29 January 2015.
Both performers have long-standing connections with the AACTA Awards and the AFI Awards which preceded the AACTAs.
In addition to her role as AFI | AACTA Ambassador, which she has held since 2001, Cate Blanchett holds four AFI Awards, and an AACTA International Award for her role in Blue Jasmine, for which she also received a BAFTA and an Oscar earlier this year (marking her second Oscar). Blanchett has also presented at many AFI and AACTA Awards Ceremonies, including at the 2nd AACTA Awards where she co-presented the AACTA Award for Best Film in a moving tribute with fellow AFI and Oscar winners, AACTA President Geoffrey Rush, and Russell Crowe, who hosted the 2nd AACTA Awards.
Deborah Mailman has won four Awards from the AFI and AACTA for her performances across film and television, including for her role in the highly popular and industry acclaimed Offspring. The 2nd AACTA Awards saw Mailman receive a nomination for Mental, and an AACTA Award win for her lead role in The Sapphires. Mailman has also regularly attended and presented at the AFI and AACTA Awards, and her performance with the cast and original Sapphires at the 2nd AACTA Awards was a highlight of the broadcast.
AACTA President Geoffrey Rush said: “I’ve had the privilege of working with both these outstanding performers. The AACTA Awards celebrate Australia’s finest, and who better to headline this annual bash than two fabulous women who have blazed like comets across our screens at home and abroad. I encourage everyone to tune in to see these performers at play.”
Cate Blanchett said: “It’s an honor to host the 4th AACTA Awards with Deb, a shining light of Australian film and television. The AACTAs celebrate our nation’s creativity and our talents as storytellers, and I’m proud to be part of this national celebration.”
Deborah Mailman said: “I am thrilled to co-host the AACTA Awards with Cate. It will be a fabulous night and the culmination of a week-long celebration of excellence in film and television over the past year. These awards take pride in the effort and hard work of all who are part of our Australian film and television industry.”
One of Australia’s most glamorous events, the AACTA Awards Ceremony also attracts hundreds of film and television fans to the red carpet and filming of the televised show, which is also a highlight on the fashion calendar.