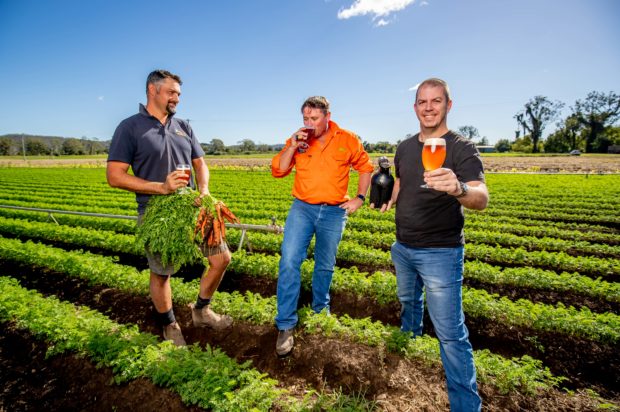 Pumpkin or Carrot Beer?? That is the question!

Not one but two! The flavour makers and local growers behind Scenic Rim Eat Local Week have unveiled not one but TWO brilliant beers for this year’s event – Wabbit Saison Carrot Beer and the Beauy & Blue Spiced Pumpkin Ale. Can Queensland get any better!!

Wabbit Saison Carrot Beer
Scenic Rim carrot farmers from Kalfresh Vegetables, have marked the start of the 2019 carrot harvest and the impending arrival of Eat Local Week with the launch of the newest batch of Wabbit Saison Carrot Beer. The craft beer collaboration with Ipswich-based 4Hearts Brewing, marks a return of the popular bucolic beer, first developed in 2015 as a way to reduce food waste by using wonky, out-of-spec carrots.

4Hearts Head Brewer Kenneth Friend has adapted 4Hearts original recipe, to incorporate a carrot mash during the brewing process. He said it results in an earthy, dry Belgian-style saison with a subtle carroty undertone. The beer is 25 per cent carrot and has the colour to prove it.

“The beer has a beautiful orange carrot-like colour which is exactly what you want from a carrot beer,” says Mr Friend. “We’ve used 60kg of carrots in this batch, which is about 25 per cent by weight. The beer has a subtle earthiness with some clove characteristics.”

Kalfresh Vegetables CEO Richard Gorman said this carrot season they expected to grow, harvest and pack more than 255-million carrots for supermarkets and produce stores up and down the east coast of Australia. “Between June and December, the Scenic Rim is responsible for producing up to 90 per cent of Australian carrots. Each year we focus on how we can reduce food waste by selling 100 per cent of the carrots we harvest, even the wonky, split and marked ones.”

Delicately crafted with locally grown Beaudesert blue pumpkins and a hint of spice, the subtle pumpkin flavour is rounded out with nutmeg, vanilla and cinnamon notes. “We only make beer the traditional way with all-natural ingredients,” said owner and head brewer Mike Webster. Mike developed the recipe to explore more of the great produce in the Scenic Rim. “After last year’s successful milk stout collaboration and sourcing lactose from local dairy and sheep farms, we sought to find another passionate farmer to explore new flavours with,” he said. “These great eating pumpkins have been developed and grown specially in Beaudesert. We love the colour of the skin and ensured the beer’s name honoured this.”

Like all their beers, Scenic Rim Brewery feature different larrikins on their labels. Designed to be relatable and likened to people you know; this theme has been continued with Beauy & Blue. Beauy is your quintessential salt of the earth farmer, and Blue, his ever-loyal sidekick. They’re a pair you’d expect to meet in any small town. A man who’s never seen without a weathered Akubra, always has a story to tell and who’d acknowledge you with a nod and single finger wave as you pass his ute on a dusty road.

Where to try: Beauy & Blue Spiced Pumpkin Ale is available at Scenic Rim Brewery NOW and on Saturday 6 July at the Winter Harvest Festival. Scenic Rim Brewery is at 898 Reckumpilla Street at Mount Alford (scenicrimbrewery.com.au).

ABOUT SCENIC RIM EAT LOCAL WEEK
Featuring more than 90 events from Canungra to The Lost World, Beaudesert to Boonah, Tamborine Mountain to Kalbar, Scenic Rim Eat Local Week is the ultimate backstage pass to the farms, wineries and food stories of the region. The famed event presents the opportunity to meet the people behind the produce and the flavours, in a celebration that features festivals, farm-gate events and culinary experiences for foodies of all ages.

Set against the natural beauty of the Scenic Rim, a region of more than 4,200 square kilometres of rich volcanic soil surrounded by ancient mountains and home to thousands of famers and food creators, Eat Local Week is one of the most authentic food festivals in the world.