CELEBRATE THE RHAPSODY TOUR WITH QUEEN IN 3D

bohemian rhapsody books books out now QUEEN by Caroline Russo | on February 3, 2020 | 0 comments | in Books | Like it 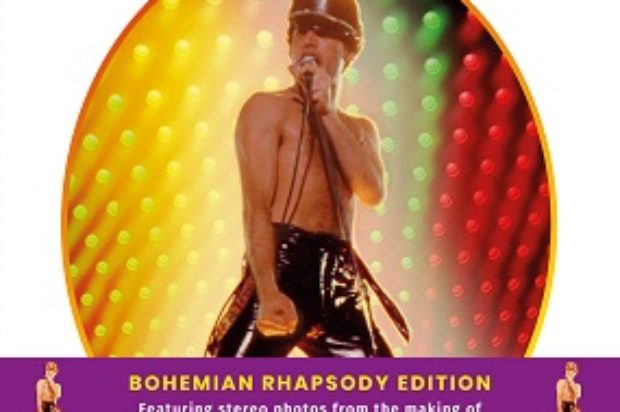 The count-down is on for the Queen + Brian May Rhapsody Tour, kicking off in Australia on the
13th Feb.
What better way to celebrate this iconic band than to get your hands on the new release 2019
Queen collector’s 3-D book (complete with a 3-D viewer designed by Dr. May)? Many books have
been written about Queen, but this is a first “an intimate view from the inside by a founder band
member”; its also the first history of any rock group ever to be created in 3-D. Not only has Brian
May written the book (no ghost writer here), but the 3-D illustrations were all captured with Brians
stereoscopic cameras, mostly by the man himself. It also features stereo photos from the making
of Bohemian Rhapsody, the Oscar winning movie.
From an early age Brian would travel with a stereo (3-D) camera in hand, so on Queen tours and
during recordings he was able to capture rare behind-the-scenes moments of one of the worlds
greatest rock bands. Decades later these are now being shared for the very first time. Some of the
photographs had not even been fully processed until the book was in the making. Initially thought
by Brian to be a quick job, this project turned into a labour of love for May and his team which
spanned three years. Each time the book seemed to be close to completion, more 3-D photos
were found in forgotten hiding places, prompting further memories and filling in the gaps in the
narrative. The book eventually became a compelling set of snapshots of Brians life and the life of
Queen, over more than 50 years.

Reviews:
“Lovingly created, visually engaging 3-D-illustrated book … Queen in 3-D, as well as providing the
closest thing to a completely non-ghost- written Brian May autobiography we’re ever likely to get,
chronicles (with the aid of numerous beautifully restored and reproduced shots from May’s own
archive that can be viewed with a specially designed and included OWL stereo- scope) the
author’s journey from childhood experiments, with his ever-ingenious Red Special designer Dad,
to the publication of the book itself. A singularly engaging trip that incorporates his entire Queen
career along the way.” – Classic Rock
“Rock fans will flip over Queen in 3-D (London Stereophonic Company), a coffee-table-book collection of photos of the classic rock band taken by guitarist Brian May, who’s used a stereoscopic 3-D camera to chronicle his time and travels with the iconic group since the early 1970s. It even comes with a special snap-together plastic viewer.” –
Parade.com
“The closest thing to an autobiography May has written.” – The Bookseller
“Queen guitarist releases incredible unseen 3-D photographs of the band in a new book” – Mail Online
“This book is beautiful.” – Chris Evans, BBC Radio 2
“Queen In 3D, brings out unsung sides of Mercury.” – Mojo “Music’s wisest rock shaman shares memories from his 47-year Queen career.” – NME
“May’s 3D pictures capture Queen in all their pomp.” – Guardia

Available now in all good bookstores for $59.99 RRP, or online at www.booktopia.com.au