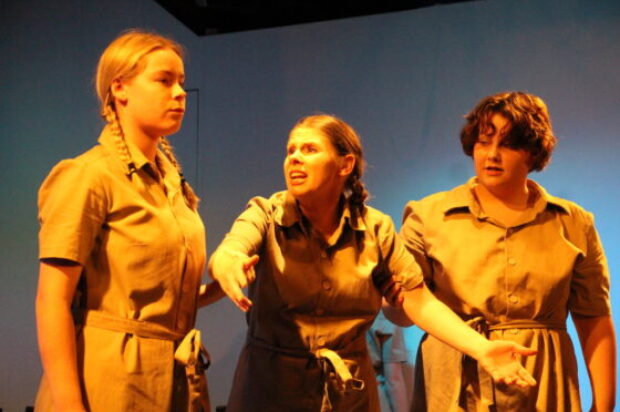 Australian playwright Alana Valentine’s Eyes to the Floor is hardly a play to conjure up the word like, but, it is important exposure of a shameful period in Australia’s recent social history.
It’s a story all too common in so-called first world countries, where so many vulnerable young people who needed help, support and, love, were treated so badly that many of us how feel embarrassment and even shame.
We’ve expect to hear stories of ill treatment, and even cruelty, in previous centuries right up to the chronicles of writers such as Dickens in the 19th century, but works such as Eyes to the Floor demonstrate that as recently as 50 and 60 years ago society was punishing those at most risk.
Award-winning playwright, Alana Valentine, has crafted the accounts of inmates and staff who populated The Girls Training School, Parramatta, and its even more cruel ‘sister’ home, the Hay Girls Home, from when it opened in 1961 to its closure in 1974.
These eye-witeness accounts presented by six of the representative young girls, and three actors as the adults, has been shaped into a powerful representation by Javeenbah stalwart and Gold Coast drama teacher Jocelyn Moore-Carter.
Eyes to the Floor – the title is a nod to the way that the girls had to stand in assembly – could be described as a drama-documentary.
There were a whole swag of hoops that the youngsters had to jump through as well as a tough regieme of work and discipline, which had no room for simple human needs such as care and attention.
Director Moore-Carter, who recalls visiting the former prison-cum-girls home when it was reinvented as a musum in the mid-1970s, explains in her directors’ notes that these young girls were in their time considered ‘wayward’ and ‘naughty’ at moral risk, but hardly the criminal types they were treated as.
During the production, well presented by the youngster and their adult counterparts, we learn some of their life stories as well as their hopes and everyday fears.
They were – as Moore-Carter says in her notes – victims of institutional abuse as undercovered in the recent Royal Commission and had little to look forward to but hard and cruel adult lives.
The production was due to be performed in May, but its development has been badly disrupted by the Covid crisis, which makes the cast and crew’s commitment to the show even more inspiring.
In a civilized democracy everyone should have a voice and the voices of this generations of abused children deserve to be heard at last.
These unwanted girls – who had to live with their eyes to the floor 24/7 – bgan their long journey to freedon when locals in the Hay area began to kick-back at the screaming and crying from the home less than 50 years ago.
It’s heard to like what we see in Eyes to the Floor, but it’s important for us to listen and learn.
It’s good to see the Gold Coast community stirring into a new awakening as our community comes to terms with the pandemic.
The Javeenbah is following good Covid practice and 2021 looks like being a very good year.