Would you lie and manipulate your way to $500,000? Or is loyalty and mateship paramount? Find out whether good will prevail over evil, or if the nice guy finishes last when Australian Survivor: Heroes V Villains premieres on 10 and 10 Play in January 2023.

Pitting Villains against Heroes in the world’s toughest game, honour and integrity will go head-to-head with deception and duplicity, and to adjudicate the battle of the year, host Jonathan LaPaglia is back in Samoa where it all began.

With a huge returning cast, and even bigger new faces, this season is all thriller, no filler. From the memorable, to the heroic and controversial, here are your castaways… 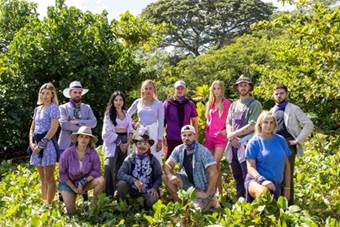 Description automatically generatedQueen Hayley Leake returns to the game as the only previous winner, alongside Survivor royalty, Nina Twine, who had her game cut short in Blood V Water and is ready to come back stronger than ever. Six years after Sam Webb played in the very first season in Samoa, he has returned, together with big wave surfer and Brains V Brawn finalist, Flick Palmateer, and the challenge beast, Shaun Hampson.

Sporting a buff for the first time is Hero Benjamin Law the ultimate slashie – author, broadcast journalist, writer and creator of The Family Law, LGBTQIA+ advocate and Survivor super fan.

He may have been your AFL team’s villain, but this former Essendon player David Zaharakis is playing for the Heroes, alongside actress Sharni Vinson, animal activist Rogue Rubin, jillaroo Paige Donald, lifeguard Matt Sharp and tourism pilot Gerry Geltch. 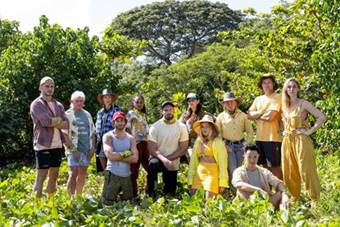 Description automatically generatedIf you thought King George was returning for redemption, you’re wrong. This time, it’s George the terrible and he’s ready to steal his “rightful crown” from Hayley.

Helping George fly the flag for team Villains is third time returnee Shonee Bowtell as well as the first person in Australian Survivor to be blindsided with two Idols, Simon Mee. The joker returns in Jordie Hansen, alongside sneaky Steve who is back for revenge, and Australia’s most successful female poker player, Jackie Glazier.